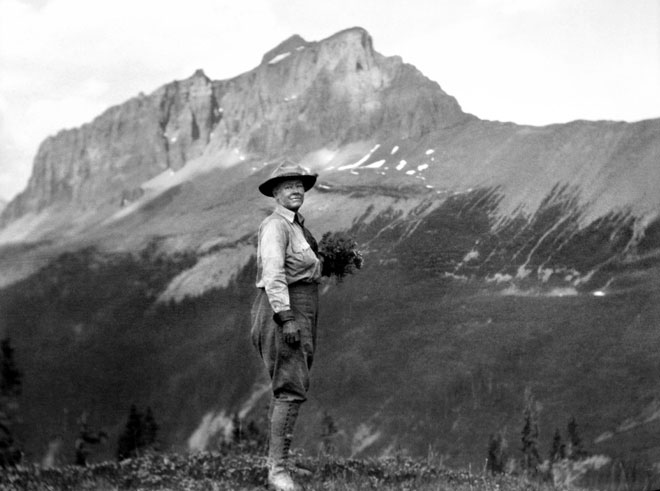 My reading lately has all been about Mary’s, from the turn of the century to now.

The first is Mary Schäffer Warren (she was Mary Schäffer until her husband died, then many years later she married her Rockies Guide, Billy Warren, and took on his last name as well).

A Philadelphian who originally hated camping, Schäffer became a hardy explorer of the Rocky Mountain region. She had originally come west with her husband and was helping him with a book of alpine wildflowers of the west by doing all of the illustrations. They would come out each summer and look for flowers to press and paint and write descriptions about. After her husband died, Schäffer was at a loss about what to do. She ended up deciding to go back to the Rockies and do what she loved – explore. In the early 1900s, she spent four months each summer exploring the landscape from Mt. Robson in the north to Lake Louise and other locations in the south. She travelled by packtrain, led by the capable Sid Unwin, Billy Warren, and once Bill Peyto – all well-known in Rockies history. Schäffer knew she was breaking social taboos with her explorations, “the media of the day insisted that outdoor life “would have little appeal to the average woman whose time is divided between her dressmaker’s, her clubs, and the management of her maids.”” But Schäffer and her travel partner, Mollie Adams decided, “We can starve as well as men; the muskeg will be no softer for us than for them; the ground will be no harder to sleep upon; the water no deeper to swim, nor the bath colder if we fall in.”

It is thrilling to read about someone exploring terrain you know quite well from your own explorations – only some 100 years after she did them. You realize that the landmarks are the same, although the Mountain Legacy Project has shown that the vegetation and glacier extent has changed significantly. It’s even more thrilling when it’s a woman making her own way and her own life after the death of her companion. She is a role model for strong women everywhere.

The second Mary I’ve been reading about is Mary Vaux, a close friend of Mary Schäffer Warren and with whom she explored Deutschman Caves, near Glacier. Like Warren, Vaux was also a painter of wildflowers, which seemed to be a common pastime amongst women explorers of the time.

Another Philadelphian, Vaux her family are known for their measurements of glaciers in the Yoho Park area. They first visited the area in 1887, when the railroad first went through. It was a brief trip, during which they snapped the first known photo of the Illicillewaet Glacier. They loved the area so much that they decided to commit to going their annually, starting in 1894. Each year, Mary and her brothers faithfully recorded glacier change and extent at the local Asulkan and Iillecillewaet glaciers. This work was written up and published by the brothers, George anad William, and they presented it to the Academy of National Sciences.

They continued their work for several years, expanding to Bow Summit and Mount Assiniboine, but avoiding Banff because “[it] has more of the attributes of a summer watering place, whilst at the other [places] there is less formality and an opportunity to get closer to nature.”

Unfortunately, William Vaux died in 1908, at the age of only 36, due to tuberculosis. George Vaux Sr. died in 1915. Mary sporadically continued their observations of glaciers in the region until 1922.

The final Mary I’ve been reading this week is Mary Oliver. My husband got me two of her books for my birthday, and I haven’t been able to put one of them down. Olive is a stunning writer, who hints at having a less-than-pleasant childhood but doesn’t capitalize on it to write memoir or confessional work. She moves beyond that time period and into the now, into the things that make her happy, make her think, make her pause.

I recently read an article by Daegan Miller that had the following quote:

“Everything is connected” is a fact, not an ethic; it has no meaning, and tells us nothing about how we should inhabit the world, simply that we do.

This question pairs well with Mary Oliver’s questions from the essay Flow in her book of essays and poems called Long Life: “What does it mean, say the words, that the earth is so beautiful? And what shall I do about it? What is the gift I should bring to the world? What is the life that I should live?”

These are such relevant questions today but they’re not ones we ask ourselves regularly. But in the face of climate change (by the way, Canada is warming at twice the anticipated rate because of changes in the Arctic), there is all the more need for these types of questions.

What will we do about climate change? What gifts do we specifically have that we can bring to the fight? What kind of life should we aim to live, morally, starting into the gaping maw of climate change? And – as Miller says – just saying we’re interconnected doesn’t answer those key questions about how we should live – here and now.

I love the stories of the Mary’s: Schäffer, Vaux, Oliver. I feel like they’re kindred spirits on the road of life – especially the early Mary’s from the turn of the century. They explored my favourite part of the globe before there were lots of people and tour buses and the horrid glacier skywalk. They saw a Rocky Mountain region that was unspoiled and sometimes a bitch to get around in, but with lovely views and untrammelled wilderness as their reward. Yes they used an exorbitant number of horses in their packtrain and carried some things you and I might not (especially since we only have backpacks instead of horses), but their adventures are of a different era, when that was how things worked, and it could still be a slog no matter if you were on horseback or on foot.