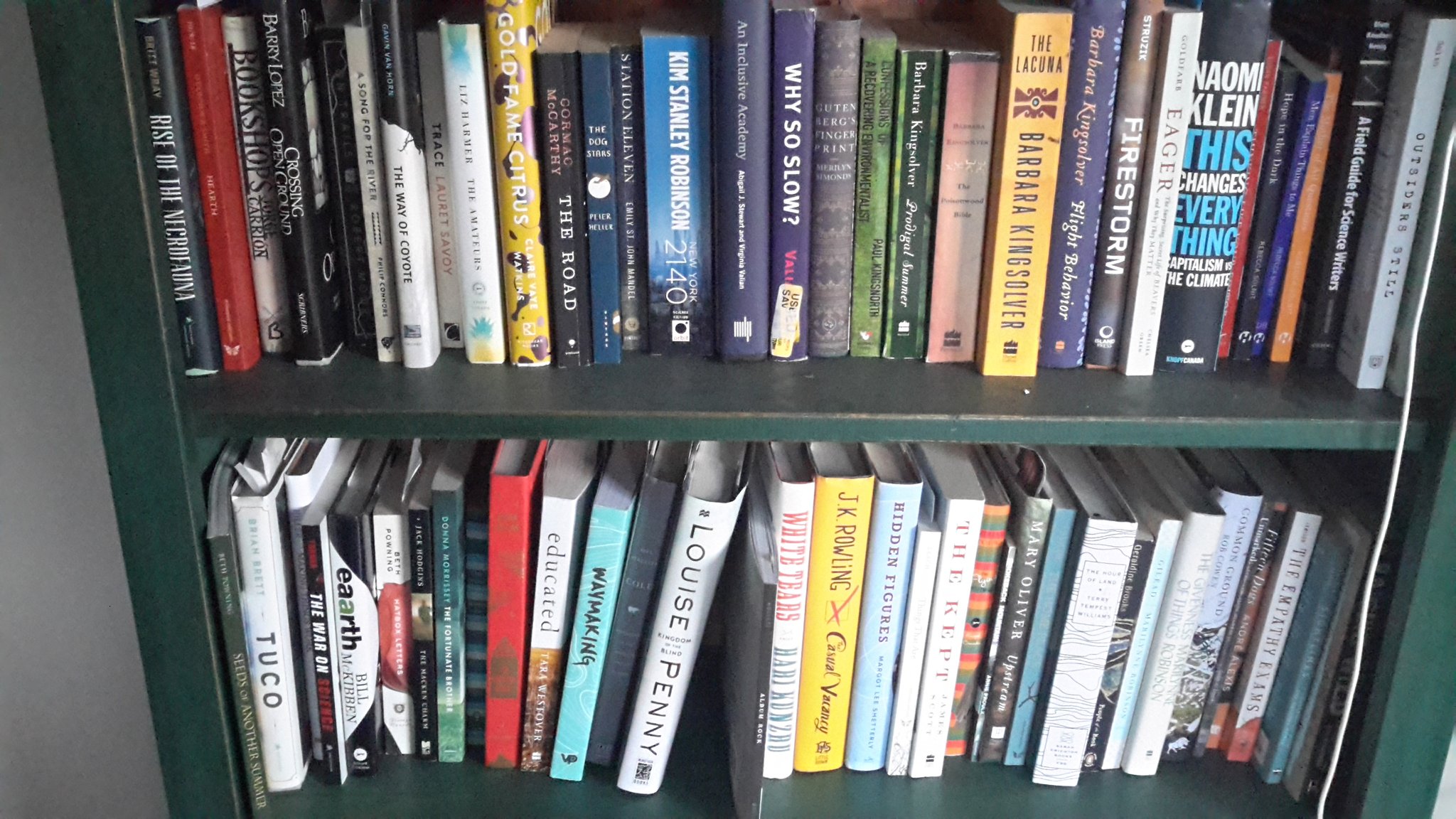 I’m late to the Marie Kondo party. The world’s expert on decluttering (mostly for rich people who can afford to get rid of stuff that the rest of us need to keep to fix or make things), Kondo stated last week that no one should have more than 30 books.

There was an outcry from the literary and bibliophile community: “How can you limit yourself to just 30 books?! Don’t you know how good books are for you? How could you pick just 30 of them? Why would you throw perfectly good books away?!”

Kondo has since changed her tune, saying that:

“If the image of someone getting rid of books or having only a few books makes you angry, that should tell you how passionate you are about books, what’s clearly so important in your life. If that riles you up, that tells you something you about that…That in itself is a very important benefit of this process.”

A bit of a weak cop-out, but at least she’s acknowledging the issue and addressing it head on.

For me, the issue is less about if books spark joy than when they spark that joy.

For example, last year my husband got me the Library of America edition of Aldo Leopold’s A Sand County Almanac, which also includes other unpublished writings and letters. I started reading the Almanac and couldn’t get into it at all. I felt bad that my husband had given me this book that just wasn’t jiving with me.

Then this December I bought Gavin van Horn’s The Way of Coyote: Shared Journeys’ in the Urban Wilds. Van Horn is the Director of Cultures of Conservation with the Center for Humans and Nature in Chicago, and his book is an exploration of his urban wilderness, in which coyotes play a huge role. He quoted from The Sand County Almanac, which prompted me to get that book out again. And I’m so glad I did.

I read van Horn’s and Leopold’s books in tandem – a chapter of one, a chapter or two of the other. They were perfectly paired, and I got so much out of the Almanac this time around.

I realized that the essay I had written that will be published on the City Creatures blog on February 5th pulled a lot of its form from Leopold – without my even realizing it.

That essay is about restoring our yard after the previous owners denuded it, and how the sounds of nature tell me what time of year it is, and also tell me we’re doing a good job of restoration. I went season by season – like Leopold – telling the story of every animal or plant I saw or heard throughout the year. Suddenly Leopold was highly relevant to my thinking. His book also felt complementary to Rick Bass’s The Wild Marsh, which is one of my favourite books and follows Bass over a year in his backwoods hideaway in the Yaak Valley of Montana.

Say I had taken Marie Kondo’s advice and reduced my library collection to 30 from it’s current size (I’m guessing I have several hundred books. Which has prompted my husband to say we’re never moving lol). What if I’d given away the Leopold book because, at the time, I wasn’t getting into it? What if I’d kept it but given away The Wild Marsh, which I now want to re-read after reading Leopold and van Horn?

When I look at my bookshelf I don’t just see books. I see piles of complementary books that I’ve turned into articles on what to read for climate change issues, for example, or women to read who write about the west. I see stacks of books I read before interviewing Barbara Kingsolver
(here and here) or Tessa Hadley (here and here). I see books about the writing craft, and remember key quotes from them. I see mystery novels that pull me in without me having to pick them up (that would be the characters of Armand Gamache and Flavia de Luce). I have books about nature, about gardening, about being human.

Ultimately I dream of having a personal library, with floor to ceiling bookcases and some comfy reading chairs. My books, my library, are what sustains me. I read voraciously and it’s this reading that allows me to write essays that draw on many influences. I can pull out a book I read a few years ago and remember there was a good quote in it that I wanted to use, though lately I’ve been copying quotes into my (index card) database to use as required.

In short, I don’t advocate for reducing your book collection to 30. Sure, I go through my books and cull them every now and then. You have to, because it’s only with time that you realize which books you really love and which are just taking up space. But I end up taking them to my local used bookstore, which gives me half price on their books (the other half comes from my credit). So I’m trading books for books, which is a pretty good deal to me!

For example, yesterday I found Cherie Dimaline’s The Marrow Thieves at the used bookstore. I snatched it up as it’s one of my recent favourites. Still looking for a copy of Esi Edugyan’s Washington Black…even though I’ve already read it, I now want to deconstruct it to see how she made it tick. The same is true of Susan Orlean’s The Library Book – I loved it but now have to re-read it to see how the structure made the book hang together.

4 thoughts on “The Right Mindset for the Right Book”