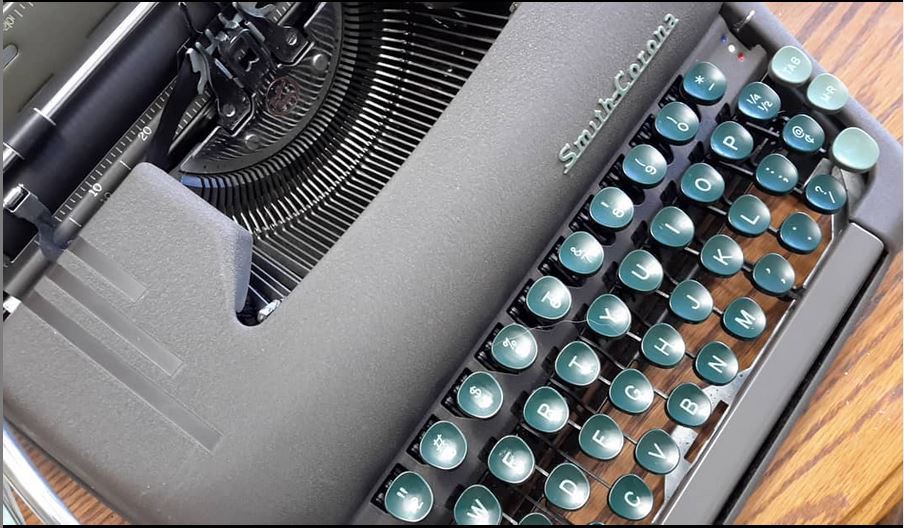 This past weekend I picked up a new (to me) secondhand typewriter, a 1950s Smith-Corona portable with beautiful green keys. It’s not as sexy as my Remington Rand from the early 1940s, but it’s more functional. The Remington has a dodgy spring in the return tab, and the ink reel is harder to replace than on the Smith-Corona. So I’ve decided to use the Smith-Corona for things like writing letters, and leave the Remington Rand as more of an art piece.

What interests me is how my thinking changes when I’m handwriting versus typing versus when I’m using the computer.

My book club friend sent me an article about how handwriting is good for your brain. That you can’t write fast enough to copy exactly what someone is saying so you synthesize it mentally before putting it on paper.

“To do that, people had to think deeply about the material and actually understand the arguments. This helped them learn the material better.”

It also has an impact on mental health

“the writing cure,” …normally involves writing about one’s feelings every day for 15 to 30 minutes, [and] can lead to measurable physical and mental health benefits

I write in my journal almost every day, but my handwriting is getting worse and worse as I have hand tremors that send my pen sliding across the page in ways I hadn’t planned for. When I write letters to my friends, I feel bad that they have to try and interpret my scrawl.

Which is where the typewriter comes in. I’ve already used it to type my first letter to a friend. It’s different than handwriting in that I don’t have to try and hold a pen steady. But surprisingly it’s also different than working on the computer because I can’t delete anything, and sometimes I forget to press the space bar or forget to capitalize the first word of a sentence. In Word, on the computer, that gets automatically fixed for you. On the typewriter, you have to think ahead and/or fix it yourself. It’s not quite as impersonal as typing on the computer.

This is good because it makes me think more about what I’m writing and how to type it out. For example, there’s no key for the number 1 – you have to use the lowercase “l”. There’s no exclamation mark – you have to use an apostrophe and then go back and put a period under it.

I also have to type with two fingers instead of all of my fingers because I need more force to push the buttons down. This is also different than working on the computer, where I can type with all fingers and the writing goes much faster. Sometimes if I don’t use enough force when typing, the letter doesn’t make it onto the page, so I have to go back a space to type it again.

A typed document is also not as clean and tidy as a printed document. There are different shades of letters depending how hard you pressed them, there are gaps in words sometimes where I didn’t press the key down hard enough. The margins are variable because I didn’t always go back to the full carriage return at the end of a line. But it’s far more readable than my handwriting.

While it’s more hands-on/manual than typing on a computer, typing on a typewriter doesn’t make the same brain connections as handwriting does.

“When we write a letter of the alphabet, we form it component stroke by component stroke, and that process of production involves pathways in the brain that go near or through parts that manage emotion.”

Typewriters are seeing a bit of a resurgence as they’re a “hipster” or “vintage” thing to do. I see them as a tool (and an art piece) – a useful one to write letters with a bit less of the impersonality of a computer document. A way to connect with my friends in a way that they’ll actually be able to read.

I watched a fascinating documentary about typewriters last year – California Typewriter. It featured a musician who uses a typewriter to come up with song lyrics because he finds it more hands-on than typing on a computer keyboard, a writer who uses the typewriter to type all of his first drafts out in his backyard writing shed, and a poet who takes her typewriter to the farmer’s market and types up poems for cash.

I also saw a documentary about Canadian poet Al Purdy’s home being turned into a writing retreat, and the first writer to attend brought her own personal portable typewriter.

I’m happy with my new typewriter – even if it does move around on the dining room table while I’m typing. I’ll still handwrite my journals, but even those are starting to get harder to read. There may come a point when I have to start typing them, too.

1 thought on “Typing vs. Handwriting”