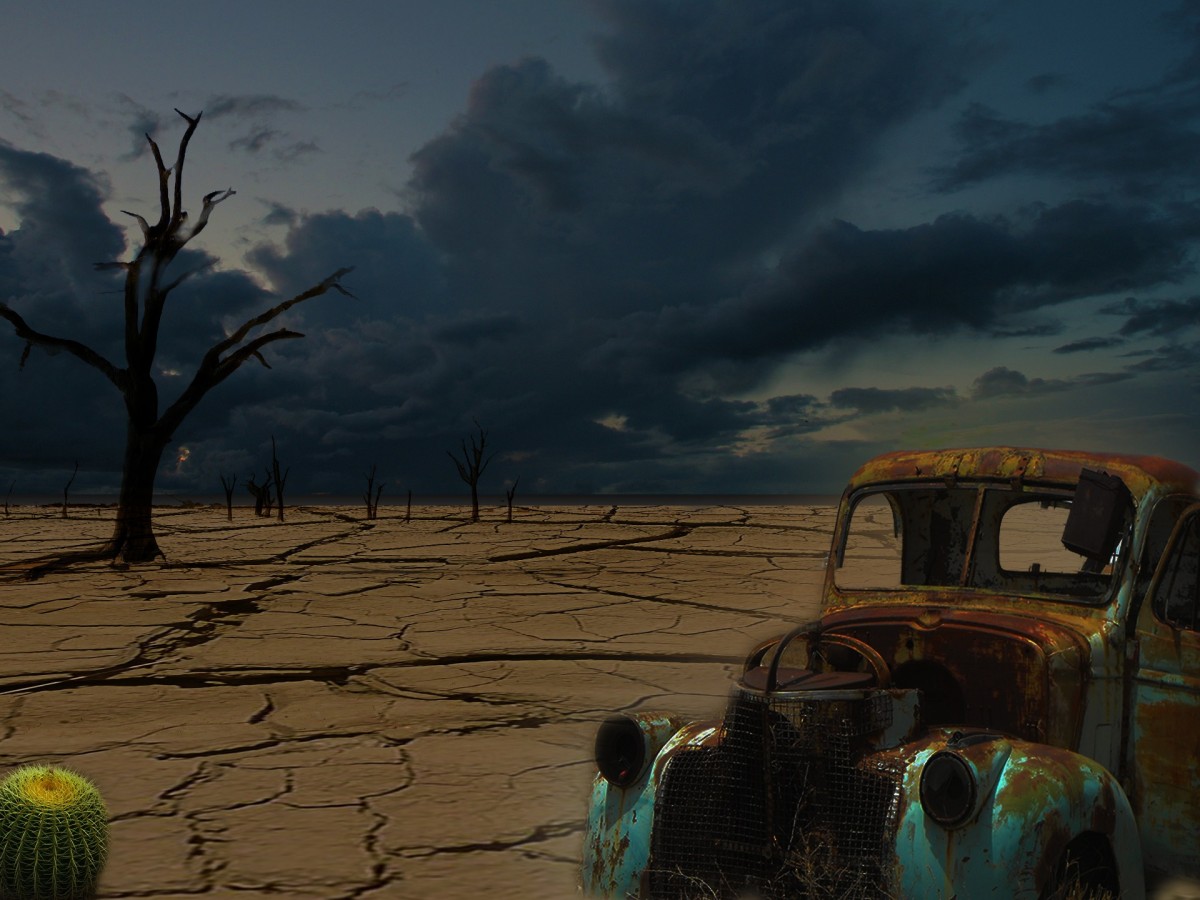 I’ve been thinking a lot about how we can use art (in my case, writing) to better understand our potential (environmental, economic, etc.) future.
The LA Review of Books recently published the transcript of a panel on The Art and Activism of the Anthropocene, with authors Helen Phillips and Amitav Ghosh and photographer Nathan Kensinger. The discussion centred around how they incorporate climate change into their work, and how hard it is for art in general to do this. They mention Barbara Kingsolver’s Flight Behaviour (which I just finished re-reading a few days ago), as a climate change novel. The critical issue they noted was that, when the book was reviewed, “the reviews are all kind of casual and sort of: “Why has she chosen to write about this, of all things?”
The panel spent a few moments talking about how modern art/literature is about identity, rather than place, and that we seem to be more comfortable writing about climate change and other environmental changes and challenges in children’s books, rather than in adult literature.
This makes an odd kind of sense. As adults, perhaps we don’t want to admit what’s coming our way. Perhaps we don’t want to read about it, either. Perhaps books like Flight Behaviour, which is just a normal, ordinary novel—not a post-apocalyptic book—are too much for people to handle. Climate change becomes ordinary, and we don’t want that to happen. As Adam Frank writes at LitHub, we need a new mythic-scale story to tell about climate change. It’s a good idea, but after reading his article I hope he’s not the one planning to write it.
It could be that post-apocalyptic fiction makes it clear that what you’re reading is a scenario, not a combination or permutation of the real world, and so the author is free to explore whatever dystopian vision of the world that presents itself to them without making readers uncomfortable.
I’ve been reading a lot of post-apocalyptic fiction lately. Partially because that’s the order in which my book requests have been arriving at the library. But also because I really enjoy the ways in which different authors envision the future of humanity.
Jeff VanderMeer’s Annihilation sets the reader down immediately in an unfamiliar world, with unnamed characters who are referred to by their occupation: the linguist, the psychologist, etc. The reader learns about the world in Area X at the same time as the characters do, which is a neat way of unrolling a story. I’m eagerly awaiting the second and third installments in this Southern Reach trilogy, because I have so many questions unanswered after Annihilation. Next up is Authority, then Acceptance.
Eric Barnes’ The City Where We Once Lived tells the story of a group of people who live in the northern part of a city, cut off from the southern part and no longer maintained or looked after. The remaining residents look out for each other and eventually build gardens, etc. Again, the characters are referred to by their occupation rather than their names. The main character is ‘the writer,’ and (s)he writes stories about the city complete with photos that are printed on a weekly newspaper. It ultimately is an optimistic book, with the north end of the city becoming more desirable than the more populated and well-serviced south end.
Most recently I read The Amateurs, by Canadian Liz Harmer. It’s interesting on one hand because the book is set in Hamilton, Ontario, which I’ve visited once so the setting is somewhat familiar. But it’s strikingly similar to Barnes’ The City Where We Once Lived: the cast of characters (these actually have names) is shacked up in a virtually abandoned city and has to decide whether they’ll stay for another winter or move south. The people who have disappeared have gone into something called Port, which was designed by a company called PINA (un-subtle play on Apple), and no one knows how Port really works. What makes this book different from other post-apocalyptic novels, then, is that it’s not an environmental disaster that’s caused the apocalypse. It’s a technological advancement—Port—that, in the end, seems to have become an entity unto itself, beyond the machinations of PINA.
Right now I’m reading Claire Vaye Watkins’ Gold Fame Citrus. This book definitely has an environmental angle: all the water in the west has disappeared and people are either living on a black-market economy in the western states, or moving to the eastern states as they’re permitted. The middle of the country has been overrun by a major sand dune complex that grows as fast in 50 years as scientists had thought it would grow in 500 years, and there are various sinkholes etc. caused by declining groundwater levels. So far it’s a book of extremes. Extreme weather, extreme people, extreme circumstances. But it definitely attributes the apocalypse to climate change.
I’ve always thought it would be useful to get writers and scientists/social scientists together to visualize plausible future scenarios for the Earth based on what the science tells us and what writers can tell us (informed by the social scientists) about human behaviour.
In fact, I came across an article this week that described just such an exercise underway at the University of Arizona, in collaboration with universities across the US and Canada. Scientists, economists, policy makers, and humanities researchers are looking at what is called The Great Transition (away from fossil fuels), and trying to create a narrative as to how this will work given real world conditions. As the researchers note, scientific data prove climate change is real, but it hasn’t been transmitted via an effective narrative.

“We’re storytelling animals. We love stories,” said Joni Adamson, a professor of environmental humanities in the Department of English. “Human thinking on climate, human thinking on energy, on energy transitions, whatever you want to call it, is centuries, actually thousands of years old. If you look back to the most ancient almanacs, people were thinking about the stars, humans and soil.”

“Books literally give us the tools to imagine transition,” Adamson said. “That’s why we’re being invited to be at the table now with sustainability scientists and people who are thinking about energy transitions.”

The article kind of peters off after these two salient quotes, so we don’t really know *how* humanities folks are involved in engaging the public via storytelling. But it’s a start.
Consider how the US is preparing for The Big One—the coming earthquake in the Cascadia subduction zone on the west coast. Kathryn Schulz uses information from various emergency and other agencies in the Pacific Northwest to tell the story of the impacts of such an earthquake in detail in her piece for The New Yorker. Part of that story comes from the USGS “Shakeout Scenario,” authored by seismologist Dr. Lucy Jones and her colleagues.
Jones covers some of this scenario in the LA Review of Books (in a review of her recent book, The Big Ones: How Natural Disasters Have Shaped Us (and What We Can Do About Them)). But what she really focuses on is community response. Most people think (and much post-apocalyptic writing portrays this) that we’re all on our own when it comes to climate change. As Jones says,

“A lot of our messaging about disasters…are very individualist messages. We say, “You need to have a kit,” “You need to have a plan,” “You need to protect your family, and you’re going to be on your own for so many hours.” Our messaging is a very American individualist message about how you should be ready, as an individual or a family unit…there’s an implication that your neighbor could become your enemy. And that’s a very self-fulfilling prophecy. If you treat your neighbor as your enemy, they’re going to become one.”

Jones believes, therefore, in building strong communities prior to disaster, as they’ll be more resilient to disaster—whether that’s The Big One or some other environmental issue. As Jones says,

A recent article in the LA Times by Elizabeth Arnold suggested we need more stories of climate change resilience, rather than climate change catastrophe. Arnold wrote that people are overwhelmed by the bad news about climate change, thus they tune out instead of taking action. However, there are positive stories out there about communities adapting to climate change—Arnold’s example is the Alaskan community of Newtok, which has raised funds to move 9 miles inland and avoid sea level rise. Dr. Jones’ examples of communities coming together after disasters also contain echoes of climate resilience.
As mentioned above, we seem to be more comfortable writing about climate change in children’s books than in books for adults. There’s a way to address this, however. Adult fiction writers can play a role in shaping more positive narratives, by portraying futures in which humans are resilient to climate change, for example the world outlined in Kim Stanley Robinson’s New York 2140. The City Where We Once Lived is also quite hopeful—at least in the sense of people looking out for each other instead of descending into madness and chaos.
It’s clear that the world is changing—hence The Great Transition mentioned above. We’re seeing the impacts of climate change now—it’s a reality today, not in some distant future. Fiction can help us imagine different potential future scenarios, whether those are caused by environmental change or not, whether they follow an individualistic or community-based scenario, and whether they’re optimistic about humanity’s resilience or not.
And obviously I like this topic a lot, because I blogged about it over two years ago. Doesn’t seem like there’s been a lot of change since then…
NOTE: The featured image for this post is from PXHere and is CCO Public Domain.

1 thought on “Bring on the Apocalypse: Learning from Future Scenarios”