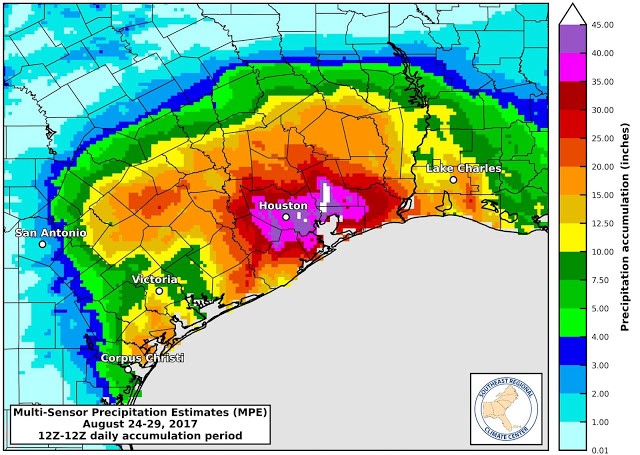 Today’s news is all about Hurricane Harvey, which caused major damage to Rockport and Port Aransas, and massive flooding in Houston and surrounding areas.
There are many great stories out there about the weather, the flooding, the historical perspective, the record-breaking rain, the role of climate change, etc. I’ve collected a few about the flooding that I found most helpful. Eric Holthaus (Grist), Andrew Freedman (Mashable), The Atlantic, and the Washington Post have also had some excellent coverage of the storm.
Houston infrastructure and flooding
This article by ProPublica was published last December, and provides an interactive look (with great graphics) at how and why Houston wasn’t ready for major flooding. The short version is that, with massive urban expansion over the past decade as millions moved to Houston, the infrastructure hasn’t kept up with their ability to manage floods. The other issue is that city officials don’t think development is to blame, and they don’t think more recent floods are anything other than freak incidents (i.e., they’re not climate change-related).

“Houston’s two top flood control officials say their biggest challenge is not managing rapid growth but retrofitting outdated infrastructure. Current standards that govern how and where developers and residents can build are mostly sufficient, they say. And all the recent monster storms are freak occurrences — not harbingers of global warming or a sign of things to come.”

ProPublica published an updated version of this article last week. At the time, Hurricane Harvey wasn’t really expected to affect Houston. Again, they have some great graphics showing areas that have flooded during more recent events (Tropical Storm Alison (2001), the “Memorial Day Flood” (2015), and the “Tax Day” flood (2016)). Then they show a map of land developed between 2001 and 2010, and you can start to see the patterns in where flooding is occurring.
Record rainfall and flooding
As of yesterday morning, the National Weather Service confirmed that at least one rain gauge reached a record high of 49.32” of rain, breaking the previous record of 48” from a 1978 storm.

The National Weather Service (NWS) had to add more colours to their rainfall chart as the ones they had didn’t reach high enough values: 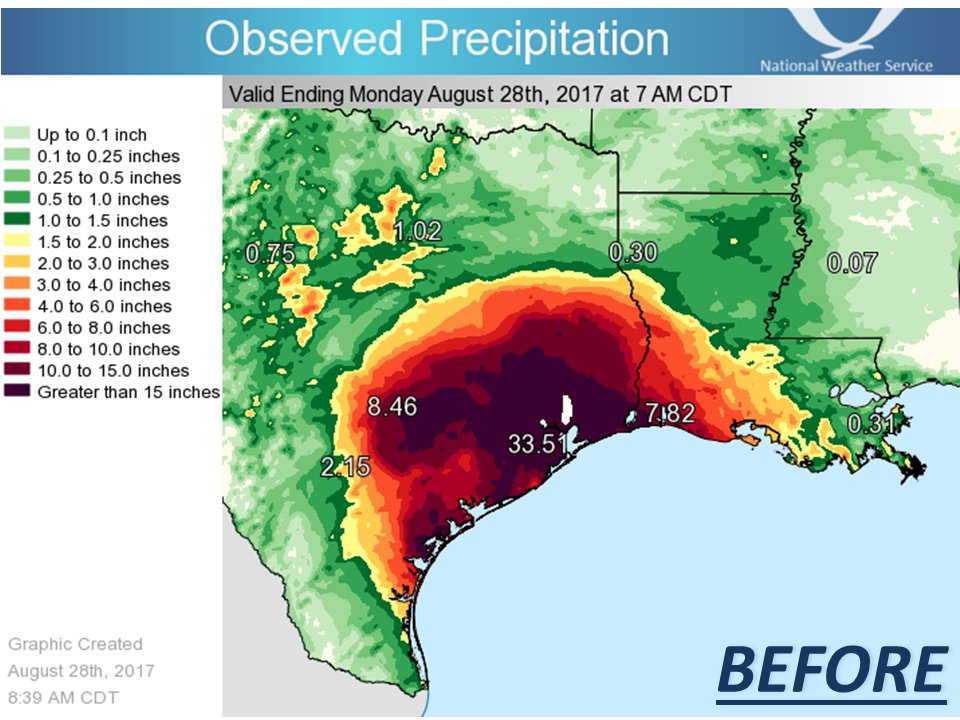 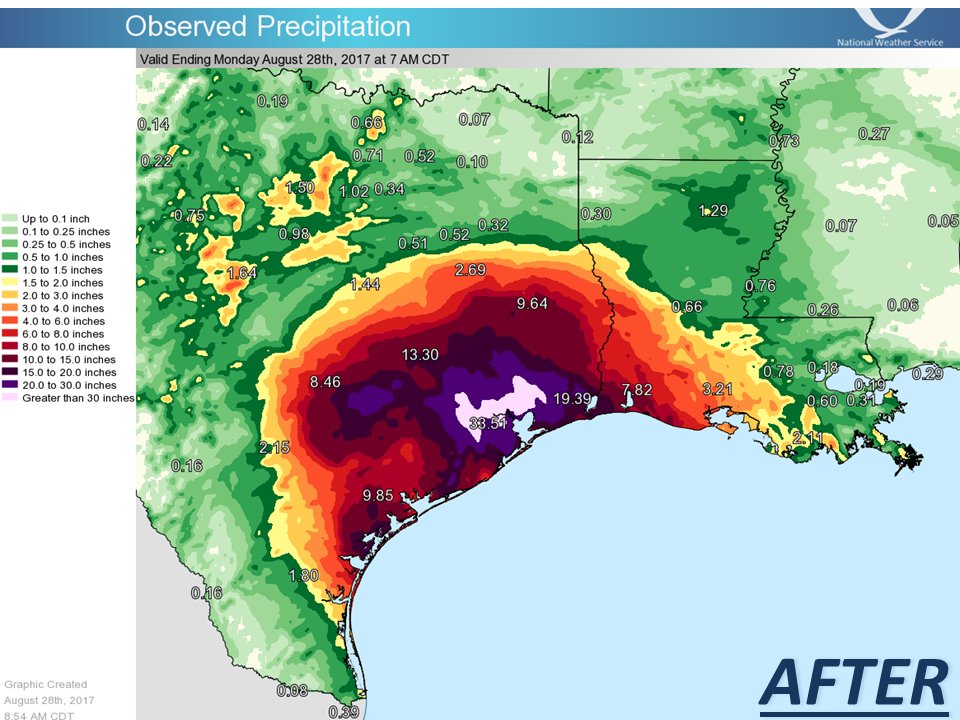 The Houston-Galveston branch of the NWS has also noted that Harvey has brought the worst flooding ever to their region: 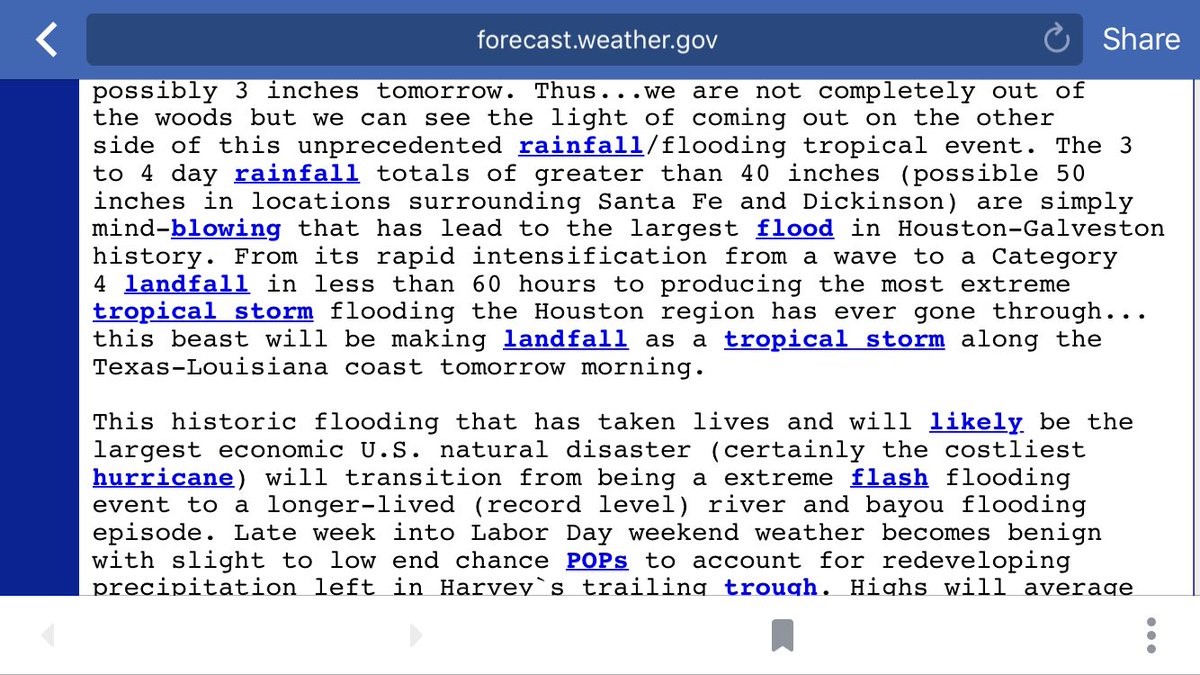 The flooding is exacerbated by the city having to release water from its two local reservoirs: Addicks and Barker. Built just after World War II, the reservoirs were meant to withstand a 1-in-1000 year flood. But with all the rain from Harvey, they’ve had to open the floodgates. But it’s not really helping – the Addicks spillway will soon be overtopped, with more flooding when that happens.

“Homes upstream will be impacted for an extended period of time while water is released from the reservoirs,” the Corps wrote in a press release. The reservoirs will take between one to three months to drain.”


This map shows the total rainfall in inches from 24-29 August:

Here’s some aerial imagery of the Houston region flown by the USGS on Aug 27.

#USCG Video: Coast Guard assess the aftermath of damage caused by #HurricaneHarvey during their search and rescue operations. pic.twitter.com/23eSED1ka5

Harvey and climate change
This is a touchy subject, as society seems to think that, when there are people in distress, it’s distasteful to talk about what’s causing the emergency they’re experiencing. The same thing happened during last year’s Fort McMurray wildfires. I think this is bullshit. We need to talk about what’s happening now, while it’s underway, and we need to do it in a way that is respectful to everyone who’s suffering the terrible consequences.
This article by Eric Holthaus sums up some of the science that attributes the strength of Harvey to climate change. For example,

“as much as 30 percent of the rainfall from Harvey is attributable to human-caused global warming.”

“If we don’t talk about the climate context of Harvey, we won’t be able to prevent future disasters and get to work on that better future.”

Even George Monbiot has weighed in, though I think he’s wrong to say that no one has talked about the impacts of climate change.
Harvey and water/air pollution
Houston and the Corpus Christi area are home to much of Texas’ refining capacity. Many refineries shut down in the runup to Hurricane Harvey, which has led to releases of toxic gases.

“upsets or sudden shutdowns can release large plumes of sulfur dioxide or toxic chemicals in just a few hours, exposing downwind communities to peak levels of pollution that are much more likely to trigger asthma attacks and other respiratory systems.”

Residents living nearby are reporting “headaches, sore throat, scratchy throat and itchy eyes,” but they can’t get away because of both the flooding and that fact that they don’t have the finances to evacuate.
Exxon also notes that two of their refineries were damaged, releasing hazardous pollutants, and a chemical plant in Crosby notes that they’re vulnerable to explosion and fire because the chemicals they’re storing aren’t being refrigerated due to lack of power.
Oh and don’t forget the fire ants:

It’s not just Houston
Louisiana is gearing up for serious flooding as well, with evacuations already underway. Ironically, it’s the anniversary of Hurricane Katrina. And things are not looking good as 13 of the pumps that make up New Orleans’ drainage system are out of commission.
Climate change fiction and Harvey
I recently read Kim Stanley Robinson’s New York 2140. It’s an excellent representation of our global future after the ice sheets melt/collapse and sea level rises exponentially, making coastal regions difficult to inhabit. It’s worth reading to get a highly realistic, science-based (and the science is really well done) sense of our possible climate future. Not only that, but the plot and the character development are excellent. I noticed other people were tweeting about it in relation to Harvey as well.

How can you help
It’s going to take a long time for Houston and surrounding areas to recover from this disaster. The Acting Director of FEMA said they may be there for up to 5 years trying to get things back to normal. People are already talking about this as an environmental justice issue: wealthy, white neighbourhoods will likely be back on their feet much faster than poor, Hispanic neighbourhoods. If you want to help out, Maclean’s has put together a list of ways that Canadians can help here.