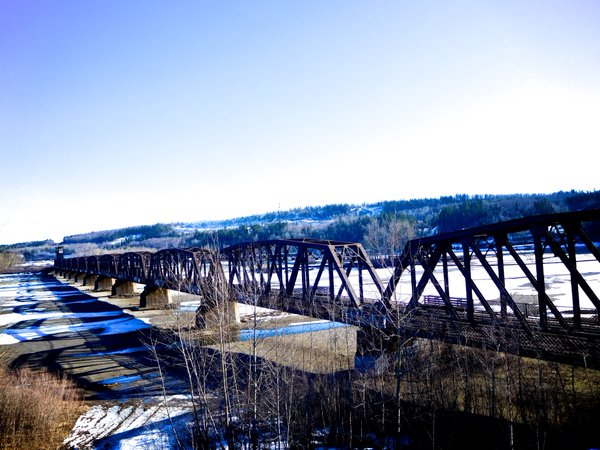 
Doesn’t look so mighty, does it? Yes, that’s the gravel bed showing through, and there’s very little water – frozen or not. Fast forward a month, and Stephen Déry – also a professor at UNBC – quoted Huber’s original tweet and said the river was still very low – low enough that people were walking across it.

Drove across the Fraser River on Monday & was shocked at how low it was… People were indeed walking across it! https://t.co/UmfbV6GccT

But as David Mayhood asked on Twitter, isn’t the Fraser River usually low in the Jan-Mar period?

Yes, it should be low at this time of year but, as we see in the black box on the plot below, on average it has more than zero flow. Usually that flow is ice covered, and there’s no exposed bed. The plot shows the average, max, and min flow in the Fraser River at Shelley (near Prince George) for 1950-2014 (I used Shelley instead of Fort George (like David did above) because the record is 18 years longer). The red line shows the actual flow from 2014, the most recent year for which data are available.

As we near April 1, the date on which water forecasters across the west look at the snowpack and try to figure out how much there is and what it means for the coming summer season, I thought I’d take a look at how things are shaping up in terms of water around BC.
Huber and Déry’s tweets suggest that northern BC is pretty dry. This assumption is supported by data from the province’s last snow survey bulletin, which came out on March 8 and is based on data to March 1.
The River Forecast Centre notes that snowpack is below normal around Prince George, i.e. the Upper Fraser East and Nechako regions. Other areas of northern BC are also below normal, including the Central Coast, Skagit, Skeena-Nass, Stikine, and North-west regions; the Liard basin is well below normal. As you move south, however, snowpack returns to normal or above normal – for example 110% of average snowpack in the Okanagan and Boundary regions.
The report makes a really important distinction: because winter was 1-4°C above normal across the province, the elevation at which precipitation fell as snow rather than rain was higher than usual. This means that, province-wide, snow below 1000 m elevation is only at 67% of normal, while snow above 1000 m elevation is at 93% of normal. The problem is that most of the provincial snow survey stations are at high elevation, so it’s hard for them to capture what’s happening at mid-elevations. These two plots show that there are only two (out of 62) automated snow pillow stations below 1000 m elevation, and 30 (out of 158) manual snow stations below 1000 m elevation. 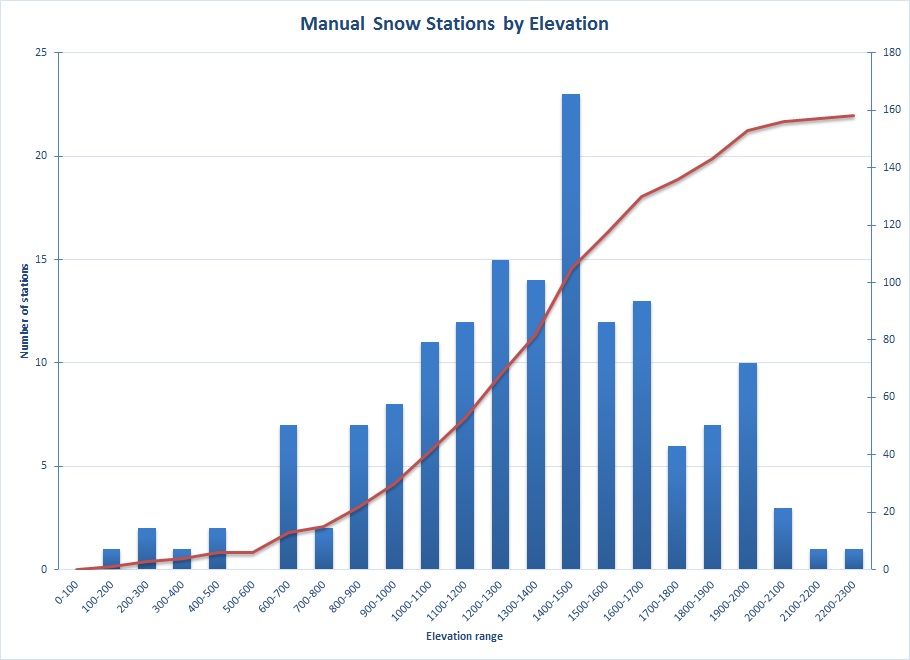 They also note that the warmer temperatures have led to earlier snowmelt – so spring freshet in some basins has already occurred, and in other basins will be much earlier. This is bad news for summer water supplies, as the earlier spring melt occurs, the longer the low flow season becomes. It also means that water purveyors who store water for use later in the season have to start storing it earlier (and could lose more to evaporation).
In an interview with CKPG News last week, Déry noted that the low snowpack could mean an early start to the 2016 wildfire season. Given the well below normal snowpack in the Liard basin, the wildfire season there could be even worse.
The warm winter temperatures and northern drought have had an associated – and unwanted – impact on BC’s northern forests: an increase in spruce beetle populations. Huber has a nice Storify of the spruce beetle here, and notes that the beetles proliferate not only due to warm weather and drought, but also due to extreme weather that can cause forest blowdown – which spruce beetles thrive in.
This interview with Canadian Forest Service scientist Kathy Bleiker (also featured in Canadian Science Publishing’s Women in Science series) suggests that the spruce beetle could reach outbreak proportions – not good news for a region and an industry already devastated by the mountain pine beetle epidemic.
Here in the Cowichan Valley, we’ve had a wetter than average winter thanks to El Nino. The Vancouver Island School-Based Weather Station Network notes that, while it hasn’t been the wettest winter in their 14-year record, we’ve had the most days with rain. I can certainly attest to that!
Despite all this rain, the River Forecast Centre predicts lower than normal seasonal runoff in the Cowichan River. As I’ve written about previously, this is potentially bad news for both water users and fish. Another dry summer could also be bad news for our ubiquitous cedar trees, which are vulnerable to drought conditions.
We’ll have to wait and see what kind of weather the late spring and early summer season brings, and how long our water reservoirs (soil, rivers) last. We definitely don’t want a repeat of last summer – so we’re investing in a 1200 gallon rainwater tank just to be on the safe side! Now to get it installed in time for the rain to fill it up…