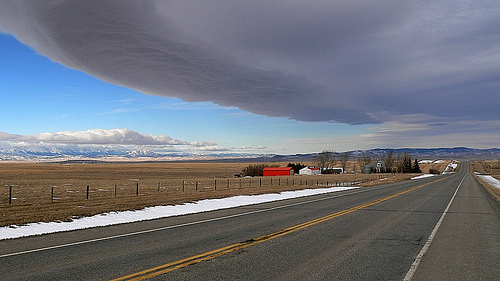 The warm dry wind which descends downslope on the lee side of a mountain range. It is warm from the compressional heating of the air as it sinks, and it is dry because the air retains the low moisture properties of the higher altitude source region. The Rocky Mountains’ chinook wind, Los Angeles basin’s Santa Ana wind, and the Swiss Alps’ foehn wind are all different names for a wind with the same characteristics. The Native Americans living on the eastern side of the Rockies referred to the wind as the “snow eater.” The chinook wind has been known to increase the air temperature by 30°C in minutes.

(So in this case not “an American Indian people originally inhabiting the region around the lower Columbia River in Oregon and Washington”, nor “a large North Pacific salmon that is an important commercial food fish” — both from Oxford English Dictionary)
If you haven’t experienced a chinook wind firsthand, I’m here to bring it to life for you. After which you can decide whether ‘being in a chinook’ is something you’d like to add to your bucket list…
————————————————————-


Driving west to east, our fuel mileage far exceeds anything the manufacturer would have guessed for this vehicle. A tailwind pushes us forward, away from the snow-clad mountains behind which moist Pacific air is building, and into the wide, bare prairie. Between Pincher Creek and Fort Macleod, we pass through a slightly hazy patch of air, and within 500 metres the temperature drops from 4°C to -15°C. The windows cloud over as any moisture on them immediately freezes – we hurry to defrost the windshield so we can still see the road, flashing by at 110 km/h.
At home, the wind slams into the house like a freight train, flexing the walls and making them creak, reaching long fingers around the window frames and wailing across the top of the chimney like a street person blowing on an empty bottle. The chinook arches across the western sky, its bottom edge fluid with shifting clouds while thinly stretched lenticular clouds race east ahead of it, a fleet of UFOs. The snow in the backyard disappears as we watch, sublimating under the steep vapour pressure gradient caused by warm, dry air and a rapid overturning of the near-surface boundary layer.

Though the temptation is to stay inside, out of the maelstrom, it isn’t an option. Once outside, walking into the wind is like a battle with an invisible enemy. You can hear and feel – but not quite see – it, and in that not-seeing space it grapples with your natural instincts. Compressing the lungs when you try to inhale, while forcing air into the mouth when you’re meant to exhale. It skates past your ears and leaves a searing pain in its wake, its gusting fury echoing like the scream of a falcon pulling its way up into the sky, fresh prey dangling from its claws.
The wind is the largest animal on this barren landscape, racing across the waving grass like the backs of a thousand black-brown, woolly bison. Dividing to flow around subtle changes in topography, flowing over cliffs and crashing into the ground at the bottom. Skimming over the rich dark chernozemic soils before grabbing them and carelessly tossing them east. Stripping soil, water, life from the land and leaving only garbage bag trees and desiccated shrubs in the coulee bottoms. The air fizzes with static electricity and is dense with airborne particulates. Hair stands on end and eyes water, noses instantly plug with dust and snot.
Along the north-south highway network, semi trucks pull into rest stops to wait out the gale. Drivers whose judgement isn’t as sound find themselves suddenly sideways, in a ditch, their boxy transport truck flipped like a toy car in the onslaught of wind. Travel trailers caught in the crosswind can explode on impact, throwing fibreglass insulation and plastic siding in all directions at the side of the road. In the fall of both 2011 and 2012, the chinook whipped up massive grass fires, herding them east and northeast into populated areas and forcing mass evacuations. Smoke billowed high up into the sky and filled the air with a thick, acrid tang as those forced out of their homes travelled via backroads – the fire having closed the main highway.

When I first got here, one of my colleagues told me that, when the chinook winds came and the temperatures rose by 10-20°C, his neighbour would yell “Yeah, chinook!” and leap into his backyard hot tub. On the other side of the coin, many of the 3rd and 4th year students in the first classes I taught here spoke of their eagerness to get out of southern Alberta, and away from the wind.
The constant debate amongst those who live in chinook land is whether it’s better to have warm temperatures and wind, or cold temperatures and no wind. Similar to the perennial Prairie argument about the merits of a ‘dry cold’ over the ‘damp cold’ experienced on the coast. I subscribe to the cold temperatures and no wind theory. Too bad the last two winters have been our windiest yet…
Please follow and like us: