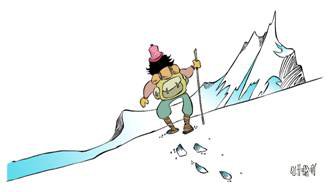 Saturday started off fairly sunny and not too windy, a good day for the long drive west to the mountains. By the time we got our shit together, though, the clouds were rolling in and it was getting dark. But we thought what the hell and went for it anyway.

Good thing we did. By the time we arrived, we’d driven around the bottom of the clouds and back out into the sun. Close to the continental divide, a chinook wind had bumped the temperature up 10 degrees to a balmy 14C. It was the perfect day to be poking around in a mountain stream, enjoying the black and white contrast of partially snow-covered mountains, and listening to the wind whistle in the pine/spruce forest.
There’s something about being surrounded by sharp peaks, with their steep talus slopes and green treed skirts, that makes me feel at home. The gurgling of a clear, cold stream as it follows the easiest path downhill is a pleasant soundtrack to this jagged vista. Maybe that’s why I became a mountain hydrologist – just rocks, hills, and water – with the wind sighing (or gusting!) across it all.


I started off working in the central Canadian Rockies which, come summer, are infested with tourists like fleas on a dog. This was where I first got hooked on that irresistible combination of rocks, water and ice. I followed this addiction to Ellesmere Island, where the mountains peeked out from under a thick blanket of ice and had few human visitors. Then the north Coast Mountains, the constant fog banks glowing with the greenish fluorescent tinge of a temperate rainforest sustained by prolific Pacific moisture. And to BC’s Interior Plateau: friendly, rolling hills that belie the flatness of the name. Then back to the Arctic – this time Devon Island, with its flattened mountain peaks that drip glacier ice into the valleys below. Now I’m back in the Rockies and the Interior Plateau – just farther south than before.

One thing is for sure – the mountains will always be home. So if you can’t catch me in the office and I’m not answering my email – I’ve likely headed for the hills!

*Note – I’d show more of my own photos if they were on this computer…
Please follow and like us:

1 thought on “M is for Mountain”