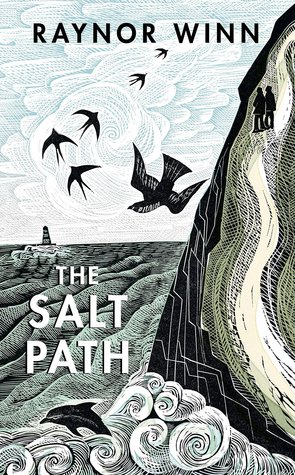 This past week I read two books by Raynor Winn, a UK nature writer. The Salt Path is the first, which was followed by The Wild Silence.

The Salt Path starts with Winn and her husband, Moth (yes, his name is Moth) being evicted from their home due to an investment debt. Because they made a living by renting out a barn on their farm for vacationers, they lose not only their home but their source of income. On top of this catastrophe, Moth has just been diagnosed with corticobasal degeneration (CBD), a neurodegenerative disease that the doctor says leaves him only a decade or so to live, during which time he will become progressively more disabled.

When they can’t find any housing on short notice, they decide to walk the 630-mile South West Coast Path, from Somerset to Dorset, via Devon and Cornwall, camping along the way. They’re limited to £48 a week, so they have to ration their food and camp “wild.” They’re not your typical backpackers–instead they call themselves the “hiking homeless.”

The Wild Silence reveals some of the backstory behind how The Salt Path became a published book. Winn originally wrote it for Moth as a birthday present, and her daughter suggested she try to publish it. We also learn more about Winn’s childhood, and there are also stories about how she met Moth, and their life together before The Salt Path. There’s also more about how the walk helped rather than hindered Moth’s CBD.

Ultimately, Winn and Moth’s season of homeless hiking turns into an income source, as The Salt Path is popular not just in the UK but in Germany as well. It brings them a new home, as a Cornwall farm owner thinks they’re the couple to restore his farm to what he had hoped it could be.

What was a bit jarring in The Wild Silence is that the book is advertised as being about their time on the farm, but it’s overshadowed by the stories of their history as a couple, and an account of their backpacking trip in Iceland with friends they met on the Coast Path. Iceland is interesting, but it seems like a hard right turn to the overall narrative.

While either book could have been a boring description of daily life on the Coast Path or in Iceland, Winn’s writing keeps it exciting and interesting. The reader is drawn into the story into which she has embedded a part of herself, but she also looks outward to bigger issues – like homelessness, or the geology that has formed the terrain on which they’re hiking.

She has a unique way with words, describing a natural world that retains its wildness even as she writes about it, as in this quote about Iceland:

“All that was left was the roaring, wild silence of an empty land without vegetation or animal life. A heaving, crashing chasm of noise and movement, overlaid by a veneer of stillness.”

Winn is a courageous writer in that she’s not afraid to show her heart. She bares her deepest fears—losing Moth, and shares her greatest joys—usually something they’ve seen along their walk. She doesn’t wallow in self-pity, though she is remarkably frank in saying what she feels.

“…I couldn’t stop crying. I gasped into the running water as I shed a layer of skin and sweat, bitterness, sadness, loss, fear. But only a layer. Whining self-pity: I couldn’t afford to let it in.”

What I enjoyed most about Winn’s books is her sheer joy in the outdoors and being alive:

“It’s wild here, a corner where tides winds and tectonic plates collide in a roar of elemental confusion. A place of endings, beginning, shipwrecks and rockslides. The viewpoint by the railings caught the air and rushed it up in a jet of cold, oxygenated, sea-spray fizz. I flew with the power of the uplift; alive, we were alive.”

The books remind me somewhat of Rick Bass’s The Wild Marsh, which shares Winn’s unbridled enthusiasm for wilderness and being outdoors. It’s also great to read about a book being successful enough that the author is able to afford a higher standard of living, as most of the time we hear that selling books doesn’t pay and you should keep your day job. I also feel that these books are a gift to me, a chance to learn from Winn how to write with my heart and soul and not just my mind. If she can do it, why can’t I?

If you don’t mind enthusiastic, soul-baring nature writing, I recommend both books, just make sure to read The Salt Path first. 🙂

3 thoughts on “The Salt Path and The Wild Silence”