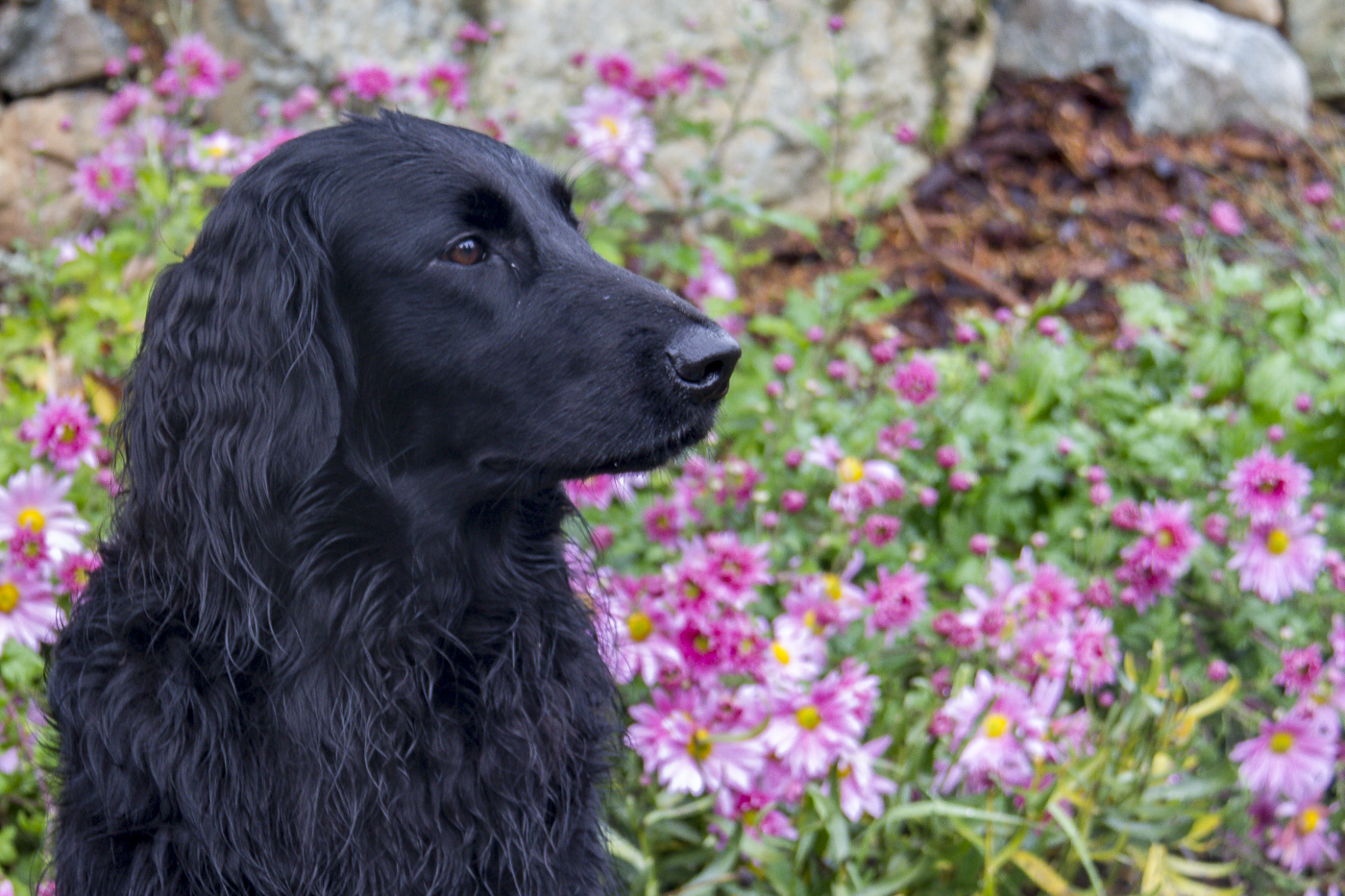 This past week we unexpectedly had to say goodbye to one of our flat-coated retrievers.

The American Kennel Club website notes that “Flat-Coats were first bred in the mid-1800s…(they) were once Britain’s most popular retriever, before being overtaken by Labs and Goldens, and (were) once called the “Gamekeeper’s Dog” because of their widespread use on the sprawling estates of the English gentry.” They are descended from Newfoundland dogs, setters, sheepdogs, and water spaniels.

They’re considered the “Peter Pan” of the dog world, because they don’t really mature until they’re 4 or 5 years old, and they are goofy and often disobedient until then. But they love their people, and are considered good all around dogs, as they can be equally good at showing at dog shows and hunting in the field. This video is a good example of how disobedient they can be…

Unfortunately, flat-coats are highly susceptible to cancer, as their gene pool is not overly diverse. Most flat-coats are lucky to live until ten years of age. Our first flat-coat, Jasper (registered name “Blazingstar Agassiz”), only lived for four years. He ended up with a tumour on his hind end that couldn’t be removed without likely making him incontinent. We said goodbye to him in June of 2011 and thought we’d never have an FCR again.

However, we got another flat-coat, Cedar (registered name “Eagletarn Dash Away All”), who was born just after Christmas of 2011. She was hugely energetic, scarily smart, a firecracker of a dog. Now she’s coming up to 9 years old and is as happy when playing as ever, though she is a lot slower and more stubborn than she used to be.

A year after we got Cedar, we heard about a breeder on Vancouver Island who had a new litter of puppies – one of which wasn’t yet spoken for. We decided to get another FCR, which is how we ended up with Cosmo (registered name “Coastalight Carbonado Cosmic Gem”). We hoped he would live a long life, as his grandmother Rip was 12 at the time and ended up living until 14.

Cosmo was a character. He loved his humans and loved to steal our things: socks and shoes were of particular interest. We moved to a ten-acre property when he was 9 months old and went for daily off-leash walks in the woods. He loved to run through muddy puddles and grab things off the forest floor to carry around. He even ran up to a camouflaged hunter one time, who was eating tuna out of a can with a knife.

Cosmo struggled with obedience, as he was always amped up by the presence of other dogs. He found going to new places exciting, and bounced off the walls during his periodic visits to the vet. He was always the first to notice when someone came home or came to visit, squeaking and shrieking in anticipation of having a visitor. He liked to carefully take your arm in his mouth and squeeze it in his jaws, his way of showing affection.

He was the instigator for our pack of three dogs – the other two (Cedar and Silah, a GSD cross we got in 2015) keyed off him when running out in the yard to look for rabbits or when racing into the kitchen for dinner. We always knew when he had stolen something he shouldn’t have – usually something from the laundry room. He would skitter past in a hurry with his head held high, taking his prize to his mat to maul with his soft mouth.

I tried to do hunt training with him but his overexcitement got the best of him. He had a hard time not pulling on the leash, and when he was off-leash to do a retrieve he ended up running after other dogs and trying to initiate play. Needless to say, I was often running after him with a leash in hand, calling futilely for him to leave whatever dog he was pestering.

Cosmo was meant to be our bombproof, long-lived FCR. But then his siblings started to die from cancerous tumours. We realized he wasn’t as bombproof as we’d thought he was.

Last Thursday, he raced up the stairs at 6am to have breakfast and ran outside to do his business. At 9 am he went outside to play with his siblings. By 10 am he was flat out on his mat, breathing heavily and had a thousand-yard stare, and wasn’t interested in treats or being petted. We had made a vet appointment and kept moving it up, from 4 pm to 2.40 pm, to 1.40 pm. By the time we went to the vet, he couldn’t walk as his legs didn’t seem to be coordinated anymore. The vet diagnosed a ruptured tumour, noting that his heart rate was over 200 bpm and his gum colour was off. He wasn’t bouncing off the walls like he usually would. X-rays showed several masses in his chest and an enlarged heart. The dog who’d started the day just like any other was now in severe distress, and we had to say goodbye.

It was heartbreaking to let him go, even though we knew there was nothing that could be done. He was such a big part of our lives with his gigantic personality that we don’t know how we’ll go on without him. His siblings, who keyed off his antics, are moping around the house – they know something is wrong not just because Cosmo isn’t here, but because we are so sad. They can tell, and are lost without their canine leader.

Cosmo was our Walmart greeter, our bunny chaser, our most excitable dog. He was also a faithful companion, snuggling up in bed at night or sleeping on my foot in the living room. He loved to play fetch, and we spent a lot of time throwing a ball for him. He was always cheerful, always hopeful that he would get some yoghourt when we opened the tub for breakfast. He was the first one downstairs when we said “do you want to watch TV?” and the first one to the door when we said “who wants to go outside?” He loved beer, and would watch Dave’s beer bottle intently to make sure he got a sip at the end. He would come running when we put out their food to soak for the day, counting kibbles to make sure he wasn’t getting shortchanged. He was uber hairy, much more so than our other flat-coats, and as such often got mats that had to be cut off and hobbit-like feet that had to be trimmed. He had soulful eyes that made him look like a little boy even though he was seven years old. He was my Velcro dog, who followed me everywhere and slept with his head on my pillow. I think he knew when I wasn’t feeling well.

His passing has left a massive hole in our hearts and our lives, especially so soon after losing my dad. We had hoped he would be our long-lived flat-coat, but we didn’t count on the cancer that riddled his litter.

The thing about flat-coats is to only get one if you’re prepared for them to break your heart.