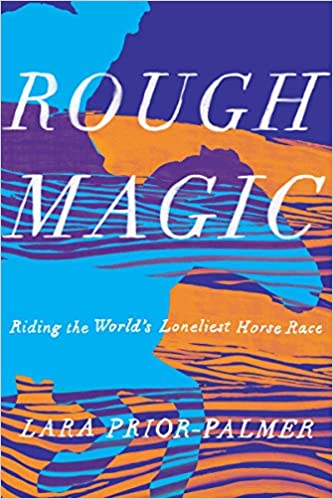 Recently I read Lara Prior-Palmer’s Rough Magic, about the Mongolian horse derby she entered on a whim and ended up winning. It was interesting to see how she wrote a book where readers already knew the ending (that she won), but didn’t know how she got there.

I’ve never been one of those horsey girls, who mooned over horses as a child and wanted horse lessons and played with My Little Pony. In fact, I’m a bit scared of horses – they’re large, powerful, and have deadly hooves. I remember when my friend and I were both in the running for the Junior Forest Rangers program, and she got in but I didn’t. She consoled me by saying that they did a lot of horse riding, which she found painful, and which made me feel a bit less sad about missing out on being a Ranger.

But I enjoyed this book because it wasn’t so much about horses as it was about Prior-Palmer finding her way in the world, a young woman who seemed somewhat lost and at odds and sods about what to do with her life finds some kind of purpose in a 10-day horse race for which she’s completely unprepared. The book isn’t filled with rapturous passages about the landscape, but it does describe it enough for the reader to enjoy it along with the rider, and to visit a part of the world where most people will never go.

The writing is beautiful, and she includes several quotes from Mongolian poet Ayurzana Gun-Aajav, which I thought was a nice touch. I particularly liked this quote:

“I strangely missed myself, who I imagine

Prior-Palmer has some great lines of her own. For example,

I can’t rid myself of the sensation that I’m about to fall of the world, as you might fall off the back of a treadmill.

she writes, conjuring up an image of a clumsy young woman taken completely unawares, flying off the globe in a heap of arms and legs.

I used to want to visit Mongolia if only because of its wide open spaces and nomadic peoples. I wanted to see this wild edge of the world, where people rode horses and ate horse milk. Prior-Palmer takes the reader there, to the Mongolian steppe, and doesn’t romanticize it – though she does have some romantic notions, like sleeping in the open on the long steppe grasses, tethered to her horse by a bungee cord. She describes the beauty but also the hard reality of riding a 10-day horse race while eating unfamiliar food and surviving on unknown quantities of ibuprofen and other medications. She describes how unprepared she is, and how little she knows of what to expect of the race.

I did find sometimes that she was a little to self-deprecating, that there’s no way she could have won the race by being the complete idiot she sometimes portrays herself as. Yes, there was some luck to her win, which I won’t write here so I don’t spoil the book for others. But she had to have the determination and the will to win to propel her inexperienced self through 10 days on semi-wild horses in an untracked landscape where she only had her GPS to follow – a GPS that she didn’t even know how to use at first.

I recommend this book for the excellent writing and for the way Prior-Palmer manages to tell a story whose ending we already know. She reminds us that it’s as much about the journey as it is the finish line, focusing our senses on the race itself rather than the win, which ends up being somewhat anticlimactic.