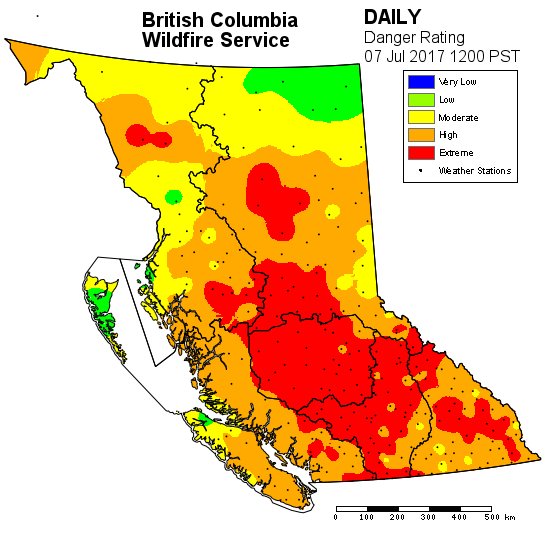 Most of my information focuses on BC wildfires, as that’s what affects me the most. I’ve also included cursory updates for Alberta, Saskatchewan, Yukon and the Northwest Territories. You can follow the links provided for more detailed information.
BRITISH COLUMBIA
Yesterday was a terrible day for wildfires in BC. Over 140 new fires were ignited by both human activity and a combination of dry lightning and high winds. Officials said:

“fires [were] reported faster than they [could] be written down — all over the Cariboo.”

Thus far, over 7,000 people have been evacuated, including hospitals and airports. Follow @EmergencyInfoBC for more on evacuations province-wide.
These were the weather conditions that contributed to sparking so many wildfires. 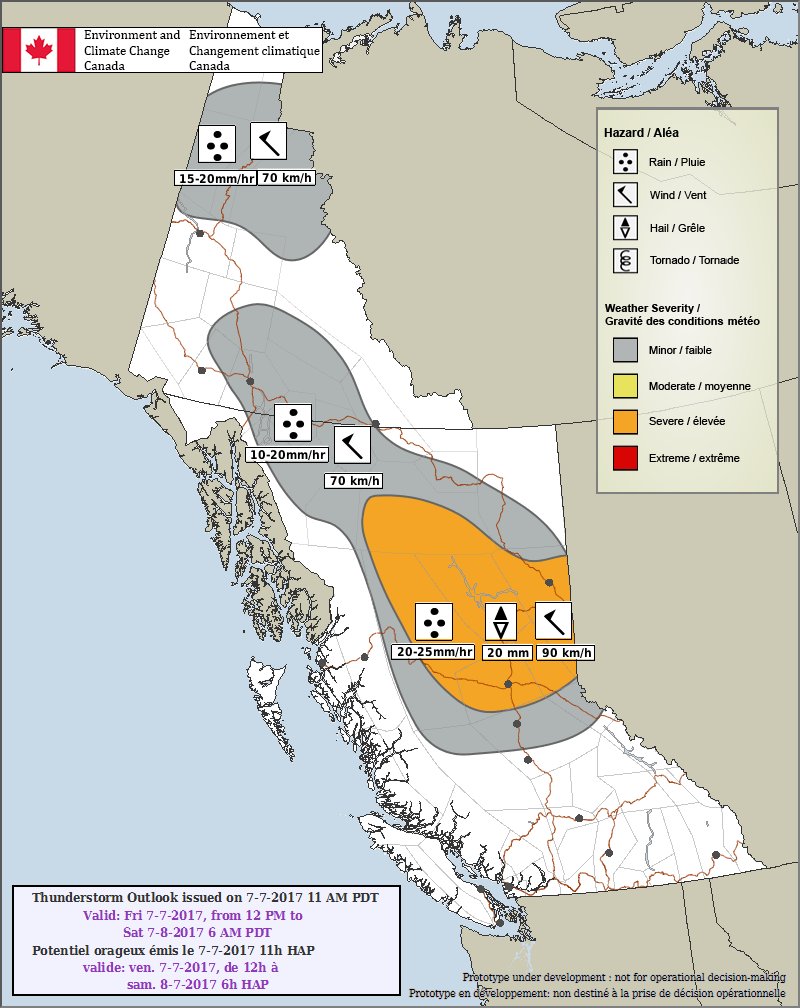 Environment Canada has a cool lightning infographic that shows the number of lighting strikes yesterday.

As of today there are 182 wildfires burning across the province, and the government has declared a province-wide state of emergency. The federal government is standing by in the event that additional help is required.

We are monitoring the #BCwildfire closely. Fed. government is ready to respond if we receive a request for assistance from the province.

How did this happen? While we had a relatively cool and damp spring, the BC River Forecast Centre’s last snow survey bulletin (15 June) notes that the weather pattern shifted in approximately early June to warmer temperatures and less precipitation. This led to an early end to the spring melt freshet, which meant an early transition to summer river flows. While the BC Drought Information Portal had most of the province at drought level 1 until the end of June, several regions increased to drought level 2 on July 6. 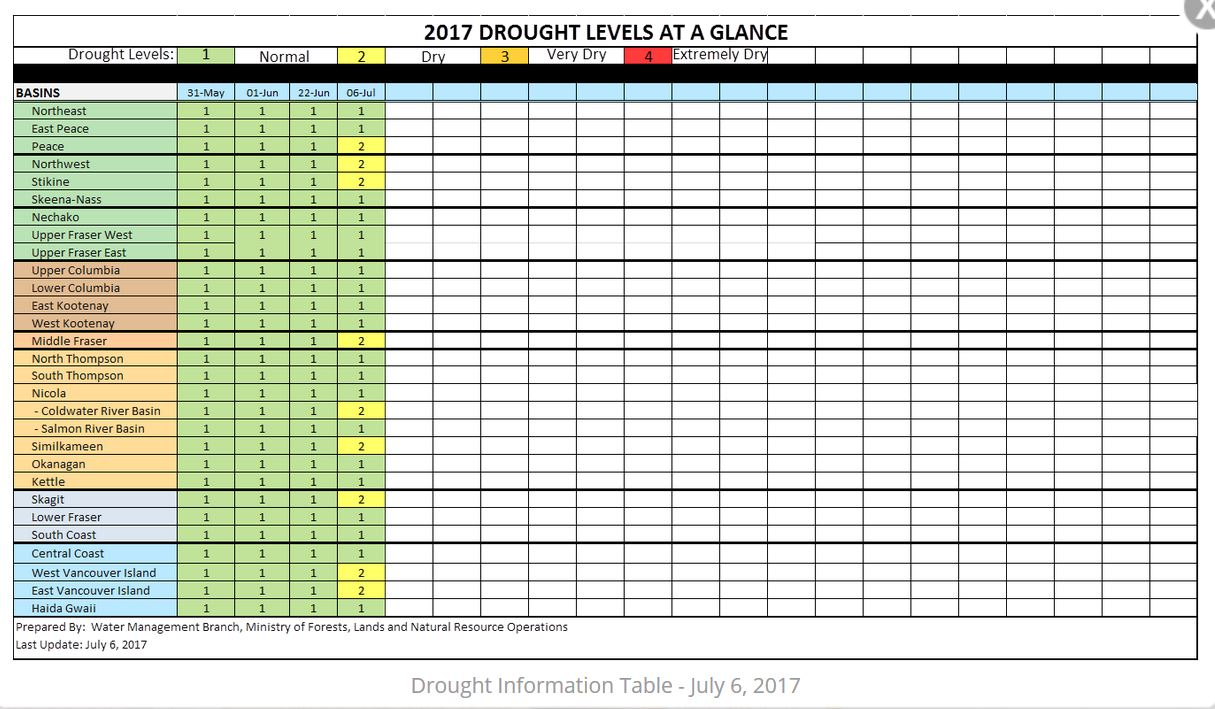 Looking at the fire risk map for July 7, you can see that it was high to extreme over much of the province.

Many of yesterday’s fires started in the orange and red regions of this map, and several communities are under evacuation orders: Ashcroft, Cache Creek, Lac La Hache, Williams Lake airport area, 100, 105, and 108 Mile house, Princeton, and more. Several fires have not only burned homes, but are also burning close to major highways, which has led to highway closures. Check @DriveBC and @TranBC for highway closures before you head into the BC Interior.
The many wildfires have also contributed to a ‘smoky skies’ air quality advisory, with Environment Canada and the BC Ministry of Environment issuing a joint advisory for these regions:

You can monitor the smoke forecast in real time with this cool map from FireSmoke Canada.
Today’s weather looks a bit better according to Environment Canada, though regional fire chiefs are bracing for more wind and lightning. 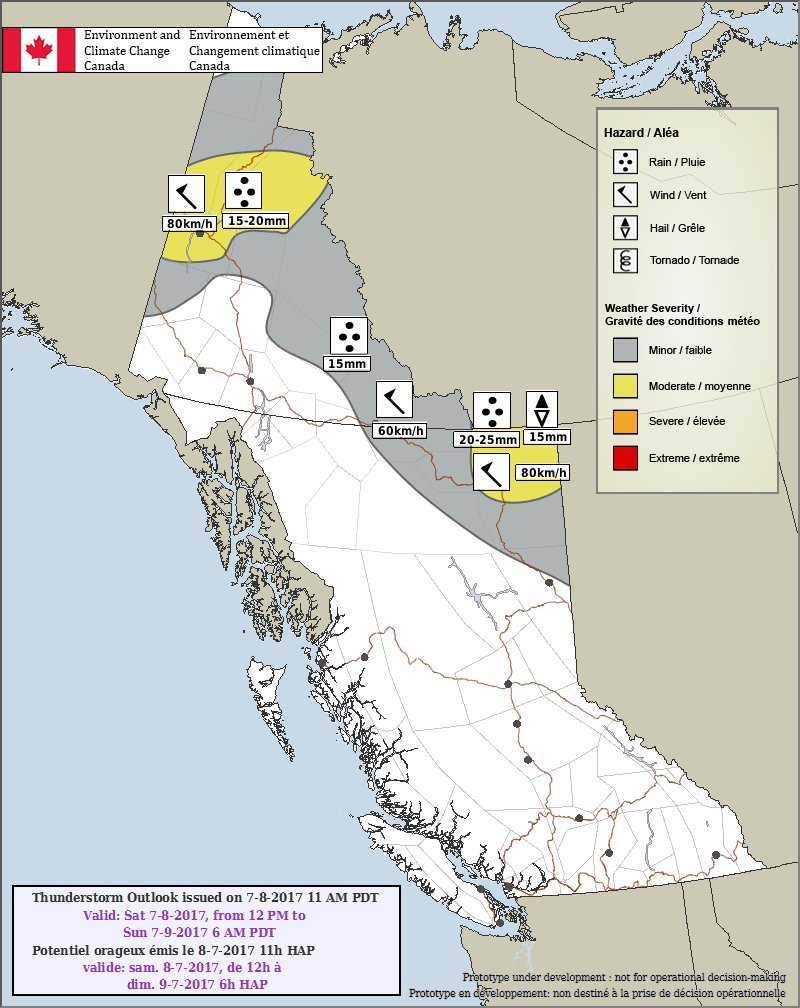 Environment Canada’s long term summer (JJA) forecast predicts higher than average temperatures across BC, which has the potential to cause a bad wildfire season. A lot depends on how much summer precipitation we get.

ALBERTA
Alberta is also facing the risk of severe wildfires. They’ve had heat advisories for the past week, with temperatures climbing to the high 30°C range, particularly in the southern part of the province. Alberta Agriculture and Forestry’s fire risk map shows that the southern foothills are at very high to extreme fire risk. 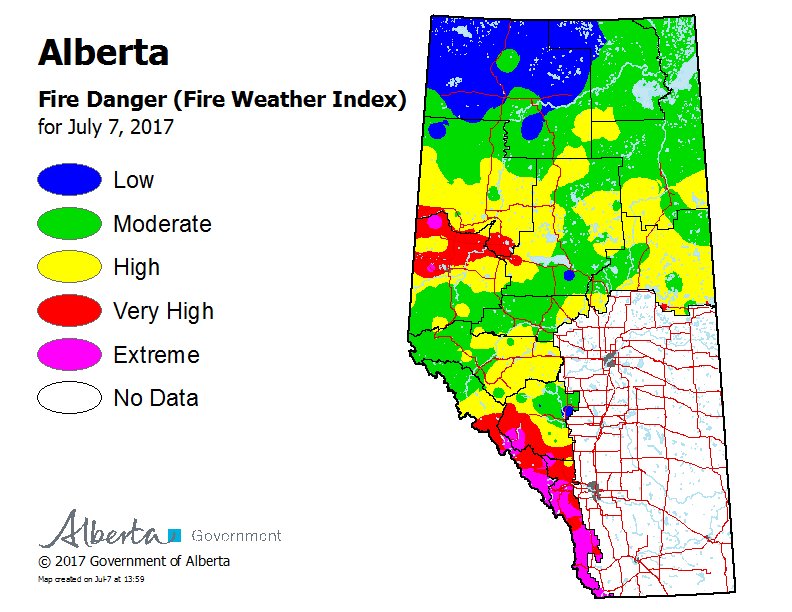 They also have a neat map that shows fire ignition probability, which is critical in these conditions. 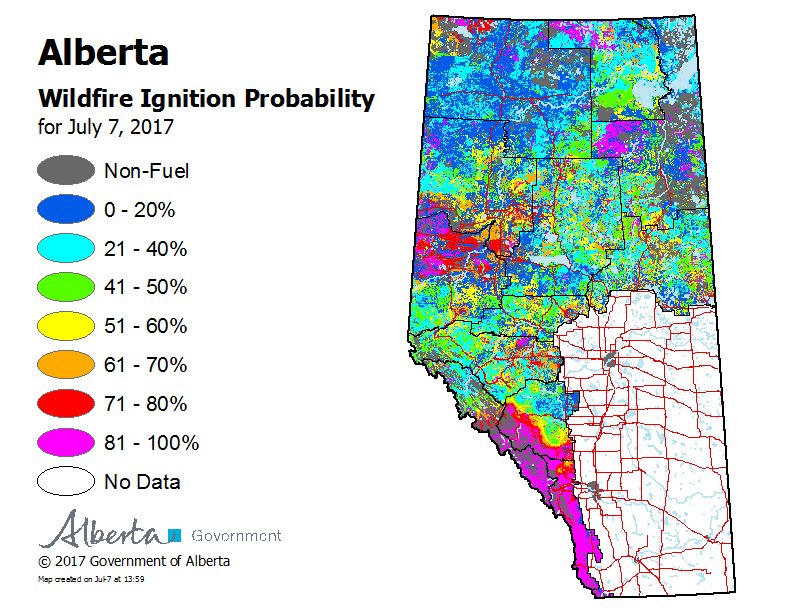 Alberta only has approximately 9 wildfires burning as of today, but if the hot weather continues, expect to see more wildfire activity. 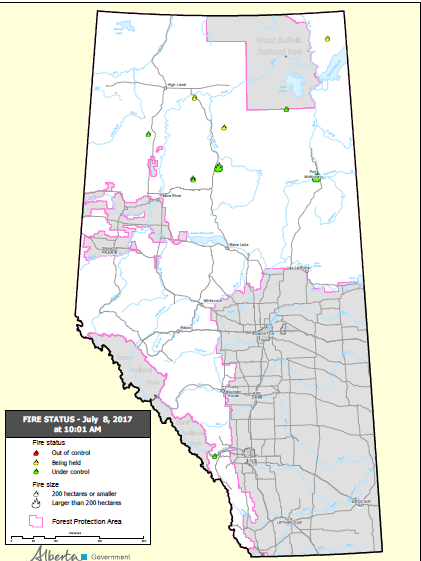 SASKATCHEWAN
Saskatchewan currently has only two active wildfires.
However, they’re facing high to extreme wildfire danger in the agricultural regions of the southern part of the province.

In good news, the forested regions of the northern part of the province are ranked as low to moderate wildfire risk.

NORTHWEST TERRITORIES
The territorial government webpage notes at they currently have 19 wildfires that are considered out of control. As for fire risk, they state:

YUKON
Wildfire season started in May in the Yukon, with a wildfire near Haines Junction. Most of the territory is currently experiencing low to moderate fire risk, with the exception of the Old Crow, Carmacks, and Dawson regions which are at high to extreme fire risk.
As of July 8th, there were ~46 wildfires burning in the Yukon, mostly in the northern part of the territory. Many are being left to burn as they aren’t threatening structures. 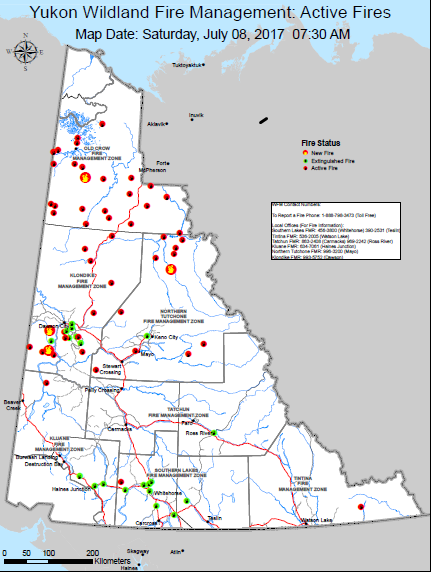 That covers the western wildfire report for the beginning of July. Fingers crossed the situation in BC isn’t a sign of what’s to come for the rest of the summer.