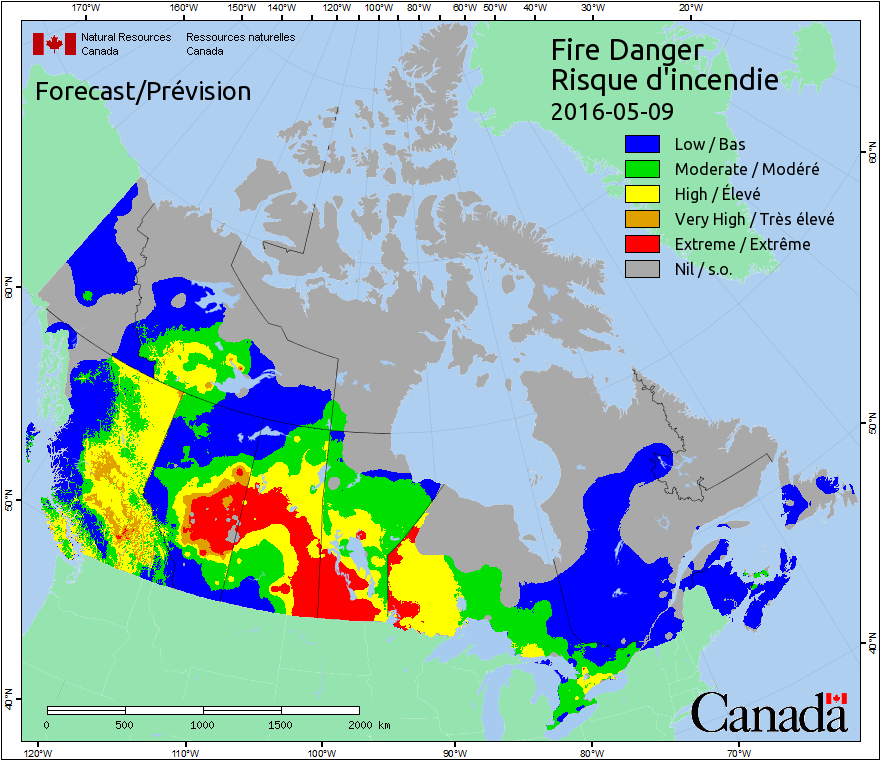 I wrote a post about the Fort McMurray wildfires for the Science Borealis blog on Thursday. The goal was to focus specifically on the fire: when and where it started, and the background conditions leading to its astronomical spread. The purpose was also to remind readers that—for all the data and analyses we’ve undertaken to understand the fire—it’s also about people: the thousands of people evacuated from Fort McMurray and the surrounding region.
Some people have asked why I didn’t specifically link the fire to climate change. Largely because I just wanted to focus on this particular fire as it was happening, and the time wasn’t right to discuss the trifecta of forest management, climate change, and interface development that can turn into this type of megafire.
In the meantime, many great writers have jumped in to fill the gap. There’s Elizabeth Kolbert’s article in the New Yorker (which links to my Science Borealis post!), there are articles in the Edmonton Journal, The Tyee, The Globe & Mail, and many more, that feature experts like Mike Flannigan from the University of Alberta (who must be existing on a minimal amount of sleep these days) and tackle the story from a range of social and environmental angles.
There’s no need for me to reprise these stories. What I want to do instead is look at the bigger picture.
So far we’ve been talking largely about the Fort McMurray fire. Dubbed ‘The Beast’ by the Fort McMurray fire chief, it’s burning over an area of ~161,500 ha. But if you look at the fire danger map for Canada, it’s obvious that many other areas are in the extreme wildfire danger zone.


In Alberta, there are 3 active fires in the Grande Prairie region, 8 in the High Level region, 7 in the Lac La Biche region, 11 in the Peace River region, and 2 in the Slave Lake region. The largest of these are Lac La Biche at 12,000 ha, and Slave Lake at 2000 ha. The High Level and Lac La Biche ones are still classified as out of control. In total, Alberta has already had 390 wildfires this year – 32 of which are currently active.

In BC, there are currently 78 wildfires burning across the province – 2/3 of which are in the Prince George forest region. So far this year, BC has had 240 wildfires. The Siphon Creek fire is northeast of Fort St John and at 41,400 ha spans the Alberta border, with 29,600 ha on the BC side of the border. A second fire northwest of Fort St John, the Beatton Airport Road fire (a complex of what were originally two fires), is estimated at 15,000 ha. Residents are on evacuation alert for this fire, while residents evacuated from the Siphon Creek fire have been allowed to return to their homes but remain on evacuation alert.

In Saskatchewan, officials are preparing for the Fort McMurray fire to cross into their province. It appears, however, that it would reach an area that burned in last year’s Saskatchewan wildfires, which means it would have much less fuel. Saskatchewan has seen 125 fires thus far this year, 13 of which are currently burning; only one of these 13 is >100ha. Wildfire danger across all of Saskatchewan is listed as extreme, with an area of high fire danger in the northern part of the province.
In Manitoba, the Caddy Lake wildfire, at about 1000 ha in size, has pushed into northwestern Ontario, leading to the evacuation of several local communities. A second fire is burning along the Ontario border, near Beresford Lake, and has already reached 20,000 ha. They’ve had a total of 51 fires to date, with 24 currently burning.
The Northwest Territories experienced terrible fires seasons in both 2014 and 2015. So far this year they’re not reporting any wildfires, though their new wildfire webpage is still under construction. Since the NWT are experiencing the same hot, dry weather as the rest of the west, wildfires are expected to occur at any time. Yellowknife is bracing for another tough year of wildfires.
The key for all of these regions is how much precipitation they get in the next few weeks. A good rainfall could go a long way towards reducing the fire risk for a large part of the summer.

BREAKING: Interior Health has issued a sweeping warning about possible exposure ... to COVID-19 in Kelowna, covering anyone who attended public and private gatherings in the downtown and waterfront areas between June 25 and July 6. https://t.co/fwzC2nX01j

Have this book on order - really looking forward to it.

Nice to see this review of @BenEhrenreich 'Desert Notebooks'. Doesn't do it justice though, IMO.

Ben Ehrenreich’s Dispatches From the Beginning and End of the World https://t.co/LZNzDe95bA