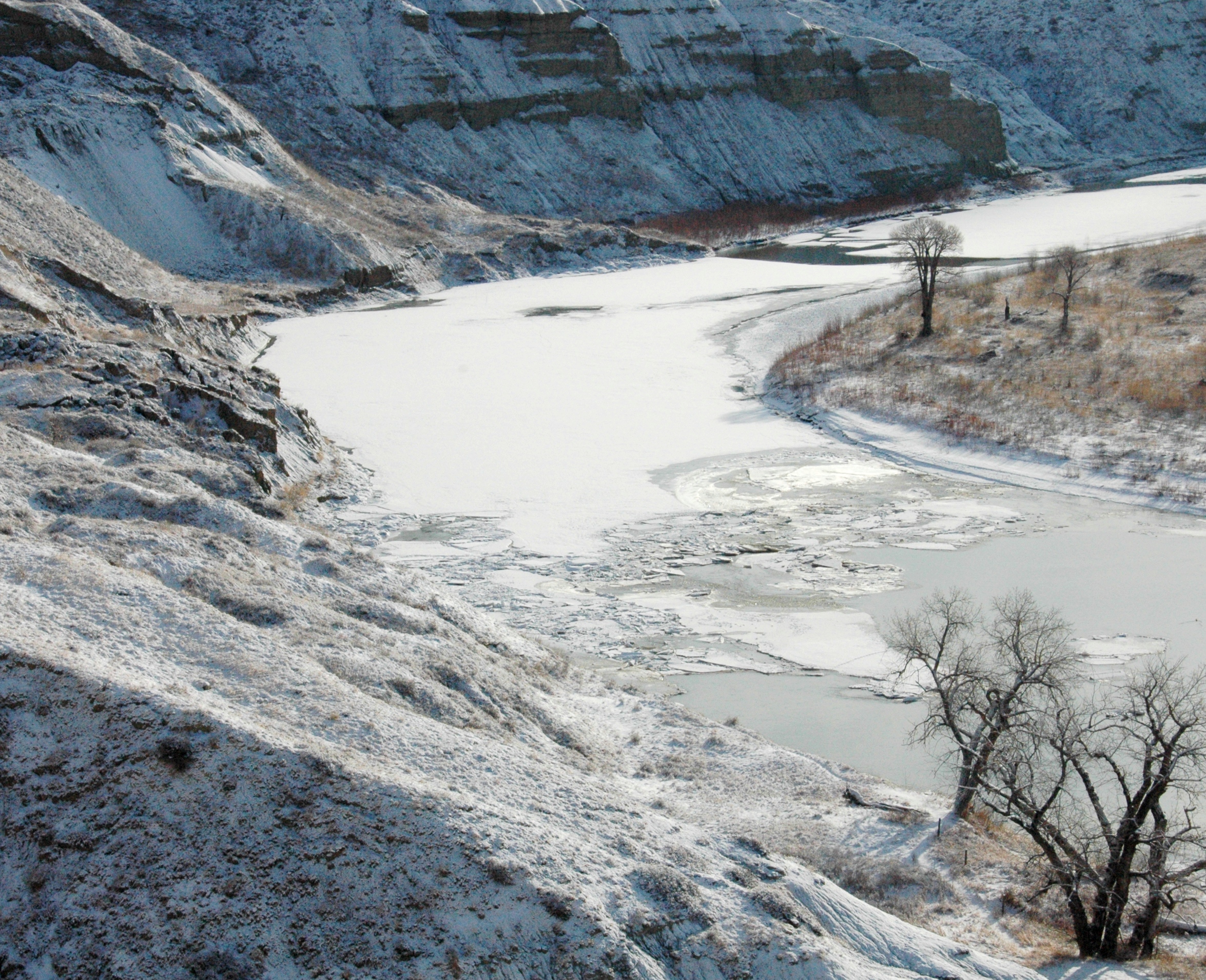 It’s spring in our northern cold climates, and that usually means ice jams. Got a shot yesterday of a small one on the Oldman River, just south of Lethbridge.


Why do ice jams mainly form in spring, and how do they affect rivers?
Ice jams usually form during spring breakup, though they have been known to occur during unusually warm periods in mid-winter . The rising air temperatures increase water inputs to frozen rivers as terrestrial snow melts. The combination of higher air temperatures and more water in the system has mechanical and thermal impacts on river ice, causing it to break up.
Ice jams develop when river ice breaks up in part – but not all – of a river system. This variable break up results from differences in both ice strength and under-ice river currents/water temperatures. The weaker ice generally breaks first,  flows downstream, and gets caught up against stronger intact ice, forming a dam of sorts. Upstream water dams up behind the ice, often causing flooding.
The jam in the picture above is mild. You can see the broken ice pieces accumulating against the upstream end of a larger chunk of intact ice, but downstream of that there’s open water again. There’s no obvious flooding, likely just a slight increase in water level upstream of the jam.
Unlike the jam pictured above, these can be phenomenal geomorphic agents on river floodplains. In Prince George, northern BC in 2008, an ice jam more than 20 km in length caused flooding in residential areas near the Nechako River. Ice jamming occurred again last spring, but was much less severe.
In the Northwest Territories, researchers have observed chunks of ice rafted up to 10 m up the river banks, shearing off trees and pushing boulders around in the process. Terry Prowse, a federal researcher based at the University of Victoria, has a series of cool videos showing details of ice jam flooding and the massive erosion (including huge shear walls of river ice). (NOTE: videos are WinMediaPlayer format and jammed up my Firefox – open in IE).
And thanks to @not_Klaatu for reminding me about Canada’s all time biggest example of the catastrophic effects of spring ice jams: the Red River in Manitoba! Especially since they were deploying those wonderfully dinosaur-like Amphibex machines back in February to try and clear some of the jams.

Ice jams aren’t a new phenomenon – here’s a picture of a 1901 jam in the Don River, Toronto from the City of Toronto Archives.

While the process hasn’t changed over time, the frequency and magnitude is changing as the climate changes. However, the nature of the change varies with location, as jams are a function of regional weather patterns which affect the thickness of the winter ice cover and seasonal river flow. It also varies with river morphology.
We’ve developed many technical solutions to try and deal with ice jams in populated areas. Fun stuff like blasting and mechanical removal (reviewed in this 1990 paper published in the Can J of Civil Engineering). Newer techniques include adding hot water to the river in an attempt to increase water temperatures and melt ice/remove the jam.
Ultimately, jams are driven by river hyraulics and weather – and perhaps unsurprisingly, these are the same processes that work best at dissipating them.
Please follow and like us: