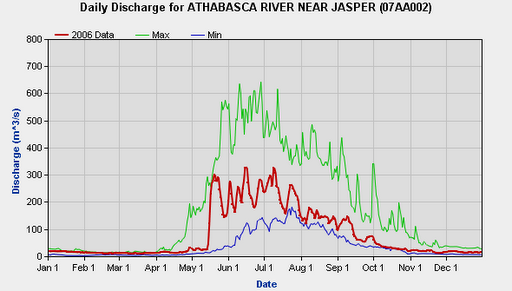 The hydrograph is a time series plot of water flow in a river, and is to hydrology what a symphony is to classical music. It pulls all the different processes that happen in a watershed together into one single composition that sings the watershed’s ‘story’. These two pictures both show a hydrograph, but from different regions of Alberta.
It’s these differences that tell a story about each basin. We can tell that the Oldman River gets a lot of snowmelt in spring, and quite a few summer rainfalls (see the spikes in the record in summer). The Athabasca River, in contrast, has more than just spring melt going on. There’s also some source of water – likely glacier melt – that keeps late-summer streamflow relatively high, and we can see the summer rains on top of that which extend into fall.
Hydrographs can tell us how much water we’ll get and at what time of year. The Oldman River basin has a lot of agricultural activity, and when do farmers want most of their water? In late summer when it gets hot and dry. But the hydrograph shows us that most of the water comes in spring, when the snow melts. So the Oldman River reservoir was built to store some of that spring melt, and then let it out later in the summer when farmers need it.
We can also look at how the hydrograph in one location changes between years, or how it changes after disturbance or land use change. All of these differences help us understand what’s happening with water in a particular watershed, and what that means for our use of it.
Next time you’re sitting next to a stream or river, think of all the stories it’s bringing with it from upstream – and how those stories can be rolled up into a single Cole’s Notes version in the deceptively simple hydrograph.

Selenium is elevated in streams below Alberta coal mines, & has been ... associated with observed negative biological effects since at least 2000; e.g.,
https://t.co/XlFGGUXdH1
#NoToABCoal

Rebuilding salmon stocks in British Columbia in the face of a climate crisis
... https://t.co/6EoiiwvBbW