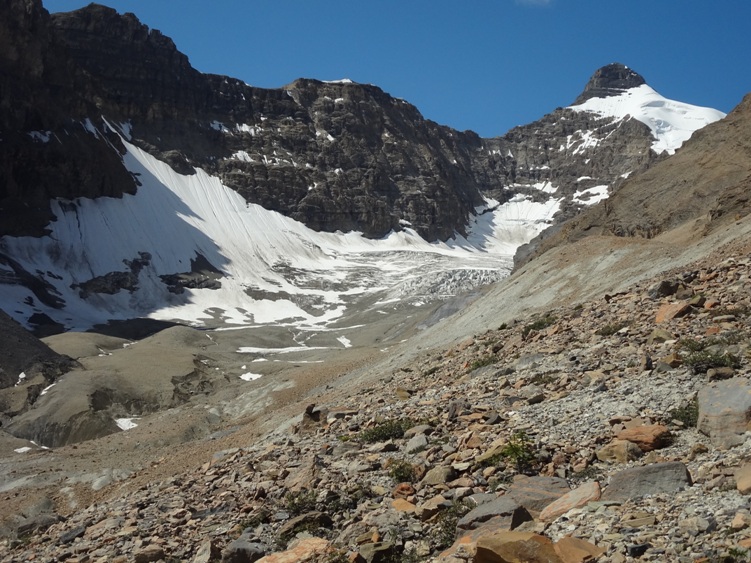 This past weekend I read Lynn Martel’s new book, Stories of Ice, and really enjoyed the focus on glaciers of western Canada and the adventure, commerce, and creativity they inspired.

There was one section on people who study glaciers, and many of my former colleagues were featured. They are studying glacier change, glacier runoff, microbes on glaciers, and more – all things I used to study and read about when I was still an academic.

It made me sad to think that I don’t do that kind of work anymore, as it was fun being out in the field exploring glaciers and working to understand their hydrology and response to weather.

My first glacier research project was during my undergraduate degree, at Hilda Glacier in the Canadian Rockies, at the northern border of Banff National Park. I enjoyed my work there so much that we revisited the site annually and ended up getting married there.

Then there was my Arctic PhD research, during which we stayed on a glacier for two to three months each summer, measuring snowpack, ice melt, streamflow, and observing what was happening on the glacier throughout the summer season.

I also managed to get to the northern Coast Mountains of BC to study Andrei Glacier, which was as remote as my Arctic work. I didn’t have a lot of research funding at this point, however, so wasn’t able to stay at the glacier and take measurements all summer. It was harder to analyze the data I collected over the summer season without having field observations to back it up.

Finally there was our disastrous trip to Belcher Glacier, on the Devon Island Ice Cap in Canada’s Arctic, where we had to be rescued a few days into our field season because of meltwater streams cutting us off from camp.

Despite some of the setbacks I really enjoyed glacier research. I got into forest/snow research during my time at the University of Northern BC, and I continued this work in my tenure-track position. But I had plans to go back to Hilda Glacier and do a more thorough study than I’d been able to do during my undergraduate degree. I had the seed money to do so, and the required research permits from Banff National Park.

I only managed to install a couple of temperature sensors in the Hilda Glacier forefield before I had to leave academia because of my mental health. These days I don’t think I could run a full research program – I could probably muddle through the planning, logistics, and decision-making of fieldwork, but when it came to data analysis my brain would no longer be able to do the math. I’m lucky that I am still able to work with words – it would be even worse if that had also been taken from me.

As someone who’s relied on her brain for so much of life, it’s frustrating to know that it doesn’t work the way it used to. The psychiatrist says it’s harder for people like me who have had an active mental life to accept our illness and live within its parameters. I can attest to that.

I am not a scientist anymore. Some days I miss my old life so much that it hurts, somewhere deep in my heart, to know that I’ll never get it back. I look at my present life and feel it’s much diminished from my old life, and I don’t recognize who I’ve become.

It’s been seven years since my diagnosis and sometimes I still wish I could go back to my old self. Somehow I have to not only give up on going back, but have hope that the future still has something good in store for me. As Kelly J. Baker said in my interview with her a few weeks ago, “the future can be scary but there’s always potential, and that potential isn’t always for the bad, it can also be for the good.” She echoed Rebecca Solnit’s views on hope, that the future is malleable and won’t necessarily follow the same trajectory as the present, that we never know what seeds we plant in the present that will bloom into beautiful flowers in the future.

I am still waiting to see what the future has in store for me, even as I live that future year by year. Some way, somehow, things will change for the better.

4 thoughts on “The Former Scientist”