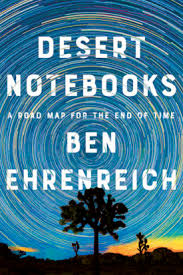 Ben Ehrenreich’s Desert Notebooks: A Road Map for the End of Time, reminds me of the Desert Fathers, early Christian monks who lived in Egypt’s Scetes desert around the 3rd century AD. Their spare life in the desert was considered ideal for attaining insights about life and connecting with God.

Like the Desert Fathers, Ehrenreich is a desert dweller, having lived in the Mojave desert of Joshua Tree, Landers, and Las Vegas. His insights in this book come from experiencing the desert directly, from learning the constellations and local mythology, and from pondering the meaning of time and writing.

He starts the book by describing a walk in a dry wash of the Joshua Tree National Park, where he and his friends see owls just ahead of them along their entire hike. “Every hundred yards or so we caught up with them and everything we had been saying felt suddenly impertinent, and we fell silent until they flew off and then walked on until we caught up with them again.”

He is immediately transfixed by these owls, and begins to dig into Greek, Roman, and Aboriginal mythology to understand what role the owl plays in each society. In between, he comments on current political events and relevant environmental news, such as new studies about marine ice cliff instability in Antarctica, which will lead to massive glacial ice loss. He also comments on the increasing levels of carbon dioxide in the atmosphere, linking it to the burning of coal by first the Romans and then the British, and the increase in carbon dioxide from this industrial revolution.

As he winds through the stories of owls in mythology, he introduces the importance of the twin ideas of time and writing.

By committing himself to learning the constellations and how they spin around the desert sky throughout the year, Ehrenreich “began to understand, as the Maya did, and the Greeks and Egyptians and Somalis and Indians and Sumerians and Chinese did, that time and space are inseparable. The sky is a clock, and the calendar is also a map.” Time was also a historical construct: by commandeering archaeological finds from the Middle East in the early 20th century, “[the British] were taking possession of history itself. They were laying claim to time.”

Ehrenrheich writes about the standardization of time in the mid-18th century, which led to the literal sense of time becoming money. “…Time, once the property of none and all, would belong to the rich and the powerful—first to the factory owners, then the railway magnates, then to the politicians and military men—divvied up according to the needs of capital and conquest.” In 1884, the globe was finally divided into time zones, with the base time zone as Greenwich Mean Time.

In terms of writing, Ehrenreich argues that it was used to define “savage” versus “non-savage” societies, that pictographs like Egyptian hieroglyphics and Aboriginal petroglyphs were not considered “writing.” Writing itself was considered a European construct that made Europeans superior to other societies that used glyphs: “If human progress could be measured in the three-step ascent from savagery through barbarism to civilization, each stage had its analog in the development of writing: from pictogram to ideogram to the perfection of alphabetic script.”

Ehrenreich connects myth with both time and writing: he talks about how the petroglyphs of various desert Aboriginal groups describe celestial occurrences like the location of the rising and setting sun on the solstice. “At least some of the petroglyphs functioned to mark the cycles of the sun and the stars. They were calendars.” He also notes that the mythology of many Aboriginal groups is mirrored in the stars: stories that “dramatize the march of the stars and planets across the night sky and their final extinction in the light of the morning.”

Awarded a writing residency in Las Vegas, Ehrenreich comes down from the solitude of the high desert, as it were, to the idolatry of the Vegas strip. People’s obsession with money at casinos and clubs is heavily juxtaposed with the homeless population, particularly the person who sleeps on a mattress in the vacant lot next to Ehrenreich’s rental apartment. He realizes that the lessons he’s learned in the high desert of Joshua Tree are the same factors that drive life in Vegas. “There was nothing to find here and nothing lost. I never left the desert. This is it.”

I liked this book first of all for the owl theme, as I am fascinated by the owls that populate my neighbourhood, and whom I hear regularly at night but have never seen. I was also impressed by just how many topical threads Ehrenhreich was able to bring together in this book, and how well he interconnected them. This is not straightforward read where A leads to B leads to C: it jumps around between topics and timeframes, and relies heavily on Aboriginal mythology, but all threads ultimately come together tightly in the end.

As the final sentence reads, “I turned my head just in time to catch a glimpse: white wings spread wide against the night. An owl, flying off into the darkness.”