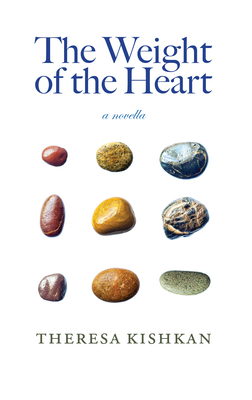 I was scrolling around on Twitter a few months ago when I discovered that Canadian author Theresa Kishkan, who lives on BC’s Sunshine Coast, had published a novella in 2020 with Palimpsest Press: The Weight of the Heart. I’ve never read a novella, but I knew I liked Kishkan’s writing from reading her blog, so I decided to order it.

It was a great choice, especially since I’m helping support Canadian literature. Not only that, it came with a custom print of the title done by High Ground, which can be used as a bookmark.

I didn’t realize just how much I would enjoy the book, which ties together two of my interests: geography and CanLit. It focuses on the writing of two Canadian women authors I’ve enjoyed since high school, and the landscape of British Columbia that I know quite well.

The story follows the main character, Isabel, as she traces her brother’s last weeks before he drowned in a kayak accident. At the same time, for her MFA thesis, Isabel searches for the physical places that two Canadian women writers – Sheila Watson (The Double Hook) and Ethel Wilson (Swamp Angel and Hetty Dorval) – refer to in their books.

Throughout the book, Kishkan includes quotes from Watson and Wilson. She also quotes from ancient Egyptian funerary texts, as Isabel’s brother was obsessed with Egyptian archaeology and parlayed that interest into a career in Indigenous archaeology along the Fraser Canyon.

The title of the book, The Weight of the Heart, connects with one of the Egyptian quotes: “Is the heart still light, does it balance in the scale as light as a feather?” To which Isabel’s dead brother replies, “Izzy, leave me alone. I don’t care how much my heart weighed…where I am is rivers, the most far-out boats, and I can paddle through rapids without even touching the water.” Later in the book, Kishkan writes in a related line, “A body in water is weightless, almost. Almost weightless, the hands fluttering a little and the feet mildly kicking.”

The book is interspersed with stream-of-consciousness sections of what various aspects of the landscape remember, be they living (magpies) or inanimate (the Thompson River). For example, “WHAT THE BONAPARTE RIVER REMEMBERS” is “west, west, and south, through grassy hills, sage-stung, cactus lying low…the Parke children wading in the shallows…swirling through hayfields…shadowed by hills…winding around Elephant Hill, flowing all the way down to my wild entry into the Thompson River.” These river-focused sections link back to Izzy’s brother and the rivers he kayaked before losing his life in the Fraser, and are well-balanced by the Egyptian quotes and the text of the novella itself.

What I liked most about the book was how tightly it tied together Izzy’s quest to fill in the blanks of her brother’s last days with her quest to find the physical landscapes that Watson and Wilson wrote about in their books, and how those two quests merge into one story entirely about landscape. These are landscapes that I’ve visited many times, from Edmonton to Vancouver on Highway 5, from Prince George to Vancouver on Highway 97 and sometimes the old Duffie Lake Road (Hwy 99) by Lillooet, and from Lethbridge to Vancouver on Highway 3. Kishkan’s book reminds me of the communities we’ve visited and the places we’ve camped or stopped to stretch our legs and get some fresh air. She does a wonderful job of painting them in just the right brush strokes that I can see them again in my mind’s eye.

It reminds me that it’s been a long time since we did our last road trip – seven years, to be exact. I miss our perambulations around the province, our landmarks and favourite places to stop, the landscape rushing past the car windows like a moving picture show. It makes me want to go exploring again, driving across the province from one end to another, taking a loop east along the southern Highway 3 out to Cranbrook, then north on Highway 95 and 93 to Tete Jaune Cache, then southwest on Highway 5 through Kamloops, and through Vancouver to the Tsawwassen ferry terminal and home again.