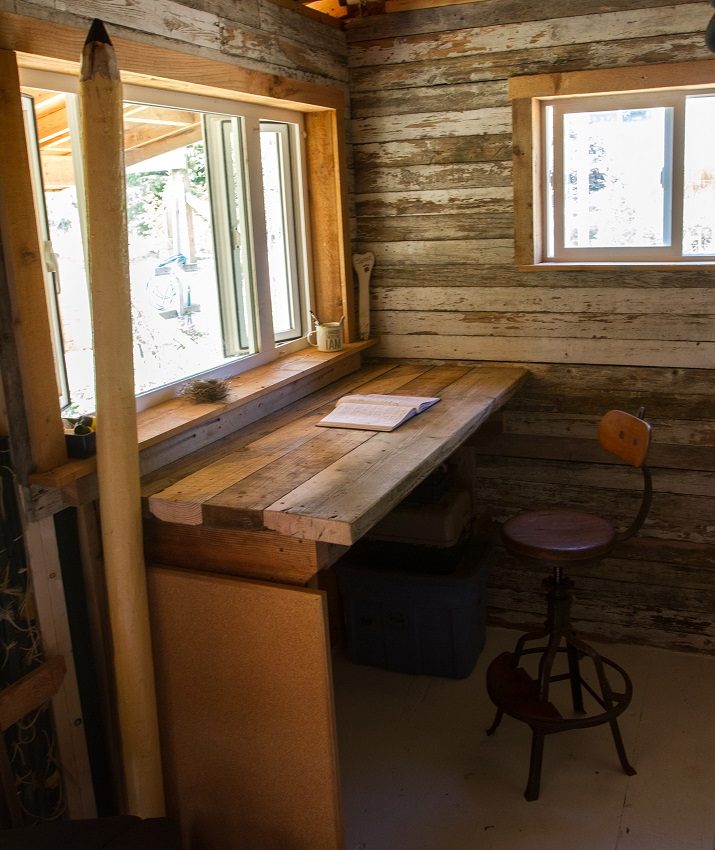 A couple of weeks ago, I wrote a piece for Brevity’s blog about my writing cabin. Yes, that writing cabin – the one I’ve been writing about on and off here for a few months.

The response was overwhelming. Everyone talked about how much they love having a place of their own to work in – or of how they hoped to have a place soon. Everyone agreed that, even if it’s just a corner of the garden shed, there’s no shame in writing next to shovels and rakes – especially if it makes for a quiet writing retreat.

Since I wrote that piece, which marked the completion of the shed, I’ve been using it almost every day.

I come out here (I’m writing this in the shed now) and spend a few minutes journaling about the day just to get into the right headspace. Then I move on to the “real” writing – the introduction to my book, or my application to a Banff writing program.

I don’t only write in my notebook – I often bring out printed work to edit by hand. For example, I had written longhand a lengthy introduction. I typed it up, double-spaced, and printed it off. I started editing it by hand in the house, then brought it out here. With nothing to distract me, I suddenly had a breakthrough that I wouldn’t have had if I was writing in the house. I realized that my introduction didn’t have to cover my entire career – only the key points leading up to my first field research project. I also realized that I could write it the same way I’ve been learning to write for my pieces with Catapult and Narratively – by using scenes and then going into detail about specific aspects on the side.

So, for example, I start by talking about the urban stream I used to explore, which was confined in a concrete channel and was more often than not a trickle of green algae rather than any kind of stream. I contrast that with the North Saskatchewan river, whose banks I would also explore, and which is huge and chocolate-milk-coloured. I’ve left a space to write about the river – where it starts, what it flows through, where it joins other rivers. Then I move on to another scene – this time about cycling the range roads and township roads around our house and seeing the fields of canola and wheat waving in the wind. I’ve left another space to talk about how much leeway I had to explore when I was a kid, and the importance of kids to be outside unsupervised instead of always being indoors, doing scripted things. Suddenly the introduction is coming to life for me, thanks to the quiet time in my shed.

Everything in this space is focused on writing: the enamel mugs on the windowsill that hold my pens, and that say “I Garden Therefore I Am” and “Tea Tastes Better Outdoors.” The feather-light birdsnest that I found in the front spruce tree, lined with dog hair, is also on the windowsill. A six-foot pencil, which my husband made for me, will soon be hanging above my desk (it needs a little bit of trimming to make it fit in the space).

The desktop is made of rough-hewn lumber that the previous owner left behind on the property, while the old white paint peeling off the shiplap lining the corner has a nice patina of age. As hip people would say: it has that shabby chic look, popular with the Pinterest crowd lol. But that shabby chic is offset by my small whiteboard, on which I’ve diagrammed my introduction and an essay for Hippocampus.

I also love my chair, which I bought used from a man in Ladysmith. He was selling two stools, both aged and with fabulous architectural lines. One was broken so is better as a plant stand than a useable chair, but the second one is perfect. It has a round seat on a screw crank to screw it up or down. There’s a circle of metal about six inches from the ground that has a half-circle of oak in it – a platform on which to rest your feet. And it has a curved back that you can adjust to be closer or farther away from the round seat – it’s perfect for leaning back in when you’re taking a moment to think. It’s also great because it feels ergonomically correct – my arms are at the right (write? haha) height to write at the table, and the seat is the right height for me to rest my feet on the platform.

When I look out the window I see directly into the veggie garden, which has been quite lush and prolific this year. The snap peas have grown taller than my head, and the pole beans aren’t far behind. The garlic is almost ready to harvest, and the potatoes are definitely ready (one variety is, anyway). The corn is slowly growing, in spurts and starts depending on moisture. The adjacent tomatoes have formed an impenetrable mass of greenery, with small tomatoes starting to form. The one giant zucchini plant is gifting us with more baby zucchini than we know what to do with (every gardener’s bane: what to do with zucchini??). There’s a flash of colour in the herb bed, where the nasturtiums are starting to bloom. And the dill stands high in the middle of the root vegetable bed, where the beets are almost ready for picking and pickling (pickled beets are my favourite). Even the strawberries look healthy, but that vegetation health has sadly not translated into producing berries. The blueberries are making up for it, though, as they’re loaded with berries and we’re just waiting for them to turn blue. There’s a crack in the window (that’s why it was free), but I hardly notice it. I look around and through it to the bounty that awaits me in the garden.

As I write this, it’s raining. We’ve been pining for rain – we had some a couple of days ago but we need days and days of rain just to help offset this year’s severe deficit. It’s pleasant to hear the rain on the metal roof, to know that the water is being funneled into a giant water cistern that has a 1200 gallon capacity. We need it this year, given how low the well is.

Originally I had wanted a writing shed that was only that – for writing. But I like this hybrid space. I have the best of both worlds – gardening and writing all in one. I have the tools of the trade hanging on the walls around me, and the fruits of our labour in the garden in front of me. What more could I ask for?