The week has gone by in a blur and I have no scintillating ideas to explore as I’ve used them all up. Though what often happens is that I start writing and all of a sudden I have a completed blog post!
Half of my energy went into recovering from writing last week’s post for the LA Review of Books blog (Breaking Our Silence With Anger), and the other half went into finishing reading and writing this week’s post for the same blog. I just submitted the latter today, which is a review of Dr. Abigail J. Stewart and Dr. Virginia Valian’s An Inclusive Academy.
This was a really interesting – if dense – read, that outlined the problems academia has with promoting and supporting diversity and inclusion, and then provided real, concrete approaches that can be used to address this issue. The authors are hopeful that universities can successfully incorporate diversity objectives into faculty hiring and retention, and faculty promotion once they’re on the tenure track. I’m less optimistic, given my experience with the white old boy’s club. But my own research (more than 20 interviews with women in science) shows that younger scientists are far more likely to see diversity as an important and achievable goal. So once those scientists get into decision-making positions, then I think we’ll start to see some wholesale change.
This review was all the more relevant given the story this past week about the senior CERN researcher, Alessandro Strumia, who said that “physics was developed by men,” and that it’s men, not women, who are discriminated against in physics. Hearteningly, the interwebz jumped into action, creating a website called Particles for Justice, where the physics community posted an open letter refuting Strumia’s claims point by point and calling for more diversity in the physics community. Over 1,600 scientists have signed it, which is incredible in a field that’s still traditionally dominated by men.
This past week also saw the awarding of Nobel Prizes – and two women won, including one Canadian! Canadian Dr. Donna Strickland (University of Waterloo) was co-awarded the Nobel Prize in Physics (along with two others), for work she did in 1985 that is now used in everything from glass cutting to laser eye surgery. Interviewed in The Globe and Mail, she comes across as down-to-earth and humorous.

“Donna Strickland’s path to the Nobel Prize in physics started with a spur-of-the-moment decision four decades ago, when a description of a McMaster University program on lasers caught the high school student’s eye. That produced a gut-level feeling that the versatile beams were not only useful, but supremely cool. “I just wanted to do something fun,” said Dr. Strickland.”

One of the striking things about Strickland’s career is that she hasn’t attained full professor status. But apparently it’s not something she’s interested in:

Dr. Strickland says the explanation is a matter of priorities. She has never sought the higher title, which requires a candidate to spend time marshalling support and documentation for an academic review committee. “To me, it just wasn’t worth the bother,” she said.

Canadian scientist Dr. Dawn Bazely wrote a great op-ed in the Washington Post about Dr. Strickland’s Wikipedia page, and why Wikipedia represents so few women scientists.
The second woman, Dr. Frances Arnold from Caltech, was co-awarded the Nobel Prize in Chemistry (along with two others) for making it possible to create enzymes in the lab for use in laboratory procedures.

“People were already using enzymes in industry but only ones they could find in nature that just happened to be good enough – but that was really not many and very problematic to get them to work in industry,” said Dalby. “When [Arnold] came along, now you can adapt your enzyme to work in an industrial environment, instead of in a cell where it is normally used to working.

On a more somber note, the IPCC released a special report this week that basically says we have about 12 years to reduce our greenhouse gas emissions if we want to stay at or below 1.5°C of warming. Increased warming will not only cost us more in property damage from floods, storms, etc., but will put an additional 10 million people at risk. Several people have recommended this National Geographic article about the IPCC report.
If you’re interested in what the difference in impacts will be between 1.5°C and 2.0°C of warming, check out this graphic from CarbonBrief, printed in an article by David Roberts at Vox: 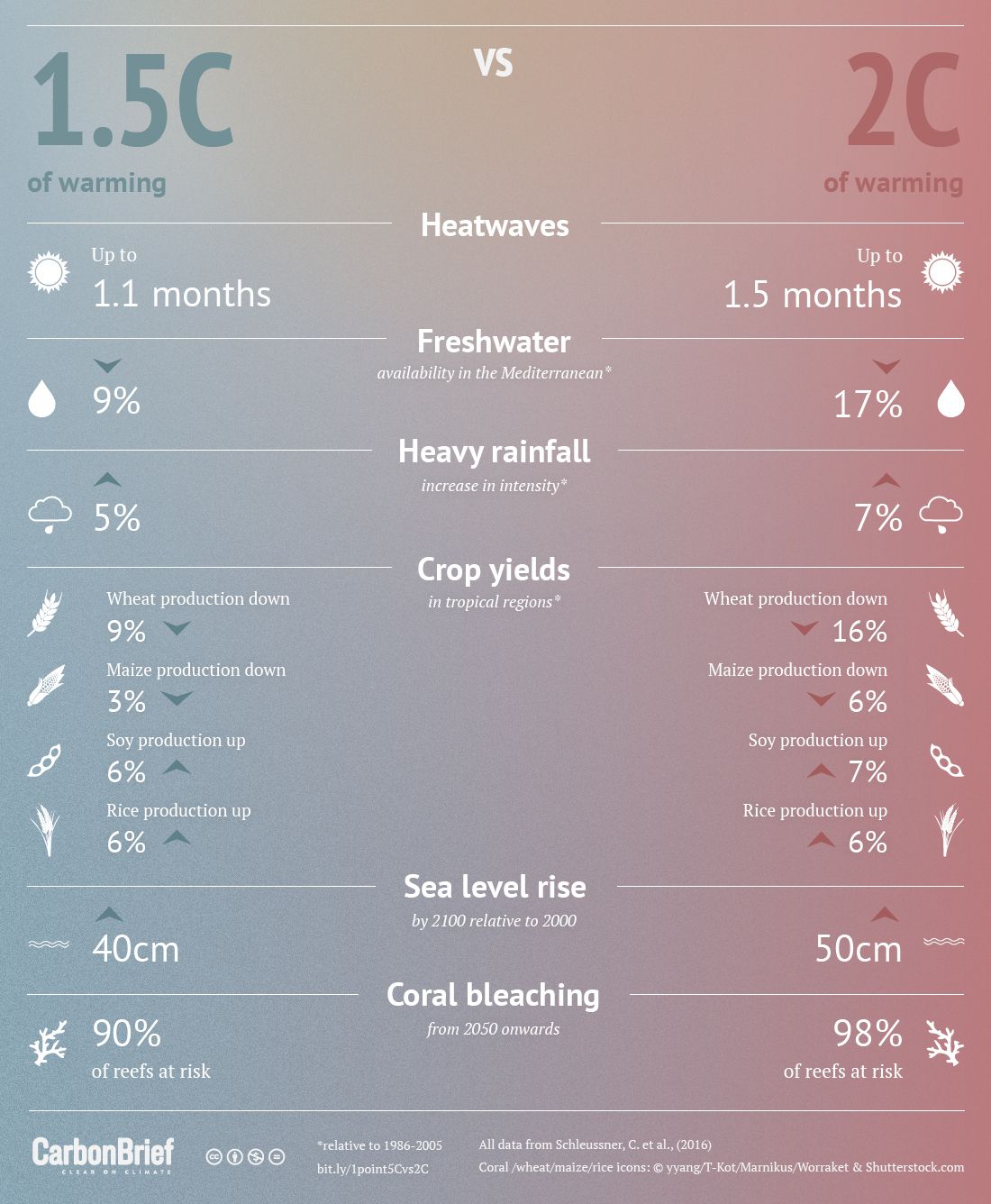 Note that several Canadian scientists were involved in the IPCC process, including Dr. Greg Flato (Environment and Climate Change Canada) and Dr. Kirsten Zickfeld (Simon Fraser University). I’m sure there are more that I’m not aware of.
I also ran across this site that features videos of US environmental scientists. I haven’t watched any yet, but they’re on my “to see” list as it includes people like Dr. Katharine Hayhoe (Canadian climate scientist at Texas Tech University) and Dr. Jonathan Foley (Director of the California Academy of Sciences).
Well. That’s my roundup of science for the past week. Next week I should be able to talk about some other things I’ve been working on in the past few weeks.