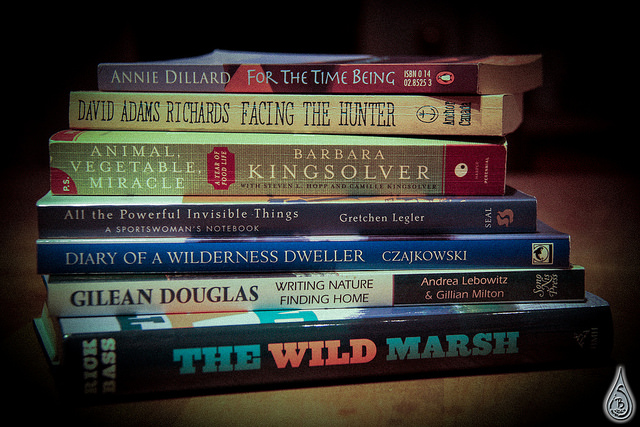 I’ve always wanted to write a book (or two, or three).
But it always seemed as though there was some alchemy involved, some incantation that you had to recite three times backwards before sitting down to write, or you’d never turn leaden words into gold.
Lately, however, I’ve had the opportunity to see book writing from a far more practical and mundane perspective.
Several of our #scienceCNF members are either writing books (Antonia Malchik is writing A Walking Life) or have already written them (Melissa Sevigny has written Mythical River (which I loved) and Under Desert Skies (haven’t read yet)). Other writing colleagues I’ve met through Twitter and Facebook have just received book deals, like Becca Lawton (The Oasis This Time: Living and Dying with Water in the West), Michelle Nijhuis (Beloved Beasts), and Kelly J. Baker (SEXISM ED: Essays on Gender and Labor in Academia).
I’ve learned from these talented women that writing a book is wholly achievable. That it’s like writing an article, only longer. That you have to have stamina, and patience, but no superpowers are involved. Some of my intimidation has worn off. But not all of it.
I think about my PhD thesis, which clocked in at over 200 pages, and I know it’s not the actual number of pages in a book that intimidates me.
It’s about keeping the reader interested. I can (I think!) keep people interested for the length of a blog post or article, but what happens when those maximum 1,500 words spread into 60,000 or more? How do you structure all those words, and tighten them into a coherent narrative? How do you avoid getting lost down dead alleys or taking on too broad of a topic so that the reader can no longer follow what you’re talking about?
How do you make sure you hook the reader at the beginning – and then keep them reading all the way to the end? How do you even make sure they buy the book in the first place?
It’s daunting to think of all the books that are published each year, all clamouring for space and recognition in the book market. A market that has shrunk again and again, so that it’s hard enough to get your book reviewed, let alone profiled in a prestigious publication like The New Yorker or The Paris Review. In fact, this article on being a good literary citizen outlines exactly what writers are up against with today’s publishing industry:

“Company founder Rob Eagar informs publishers that there is a way to “maximize budgets in tough times.” Namely, “You can train your authors to handle more of the marketing efforts. Writers who become skilled at promoting books can produce thousands of dollars in extra profits for the publisher.”
But wait. It gets better. An added benefit, Eagar writes, is that “these authors don’t require expensive salaries, office space, insurance packages, or retirement plans. Instead, the publisher just pays a small author royalty…It’s a win-win, right?”
Such advice might sound shocking, disturbing or hilariously blunt. The sad truth of the matter is that such views are pervasive in this industry. Today’s writers are expected to do more marketing work than ever before while not expecting much in the way of compensation or benefits. It’s what we are being “trained” to do.”

Writing a book, then, isn’t just writing a book. It’s marketing – both before it goes to press and after. It’s doing readings, and promoting yourself on social media and elsewhere. It’s trying to get the book into the hands of as many advance readers as possible. It’s trying to get a review in Kirkus Reviews – the gold standard of book reviews.
But wait a minute. Perhaps this is all noise and fluff. Forget about the agents and publishers, the promotion and book readings, the scaring up of advance readers and reviews.
The key, the most basic step, is just to write. Write the book you want to read. The rest is irrelevant until you actually have a manuscript (or detailed book proposal) in hand.
I have two book ideas that I think are relatively straightforward to write. I say “straightforward” because they won’t require the hard emotional labour that I suspect a memoir will require (and I want to write one of those as well). My two book ideas are like extensions of my science writing articles, which is a tone and format I’m familiar with. It’s relatively objective, with a few anecdotes included to make it (and me) more human. However, no wholesale excavation of the ruins of my childhood or the mistakes of my teenage years is required. Before I commit to the latter, I’ll have to practice writing memoir, something I don’t do on a regular basis like I do science writing. I’ll have to write shorter pieces, publish them in outlets like Catapult, and get my head around the memoir form.
In the meantime, I plan to start a science writing book project in the next few months. I’ll start slowly, take it easy, not put a lot of demands on myself. It’s not as though I have much extra energy for writing a book, but I take strength from Elizabeth Tova Bailey, who wrote while bedridden by a chronic illness. And I feel like I’m in good company. All those women I mentioned at the beginning of this post? We’ll all be walking the same path. And if past experience is anything to go by, we’ve all got each other’s backs.

13 thoughts on “Writing a Book”