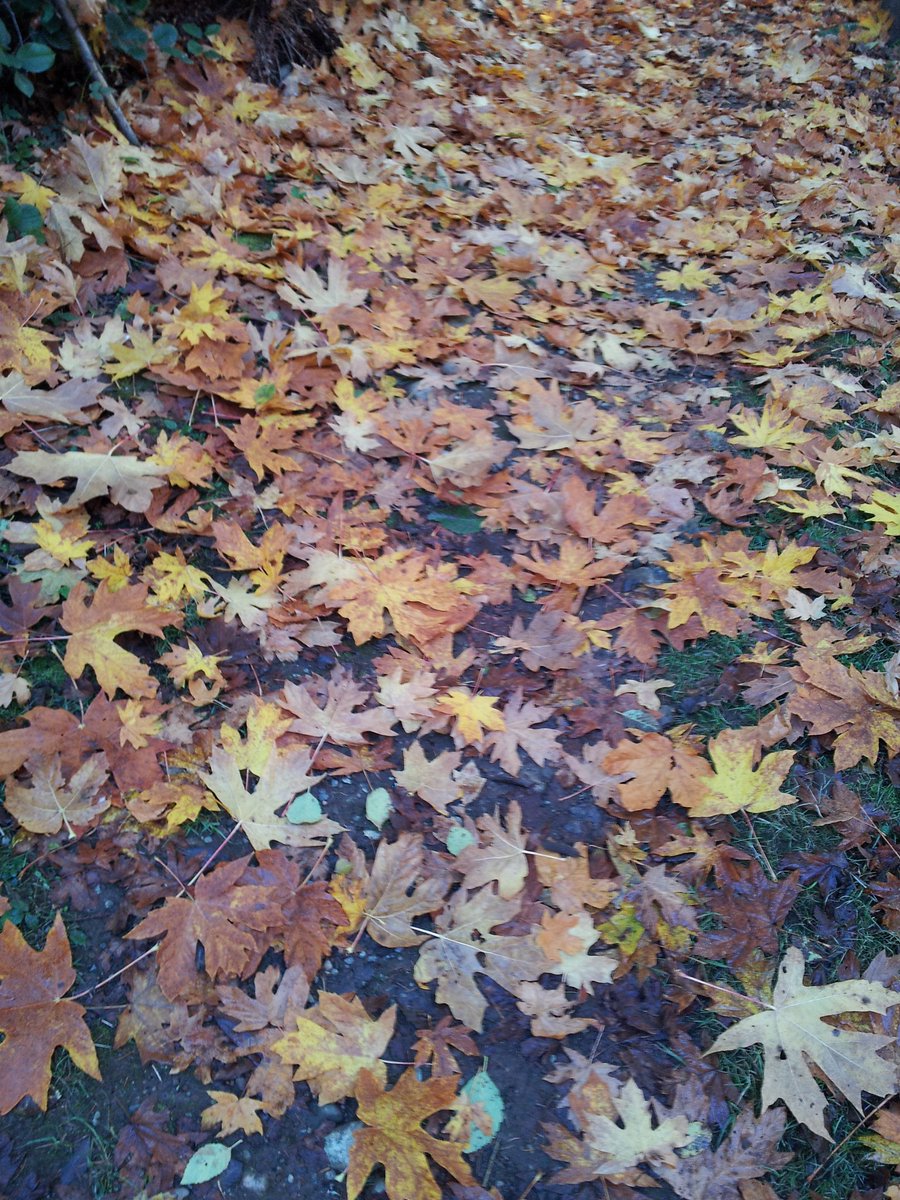 *Updated 1 Nov to add thanks to @jryancs.
It’s fall. The big leaf maples are shedding their leaves—a profusion of yellow, orange, and red covers the trail on our forest walk. I stay alert to the possibility of crossing paths with the bear that’s been wandering around our neighbourhood, but my ears are full of the sound of crunching leaves underfoot, and I wouldn’t hear it if it crept up behind me. The woman at the clothing store says she had a bear in her yard last week, that she smelled it before she saw it. I wonder how close they were—could she have touched it, perhaps, felt its coarse black pelt before it even noticed?
Fall 2017 marks the sixth year that I haven’t returned to the classroom. I no longer stand in front of a room full of undergraduates, welcoming them to a new semester.
At first the change was hard. By the time I left my tenure-track position, I’d trained to be a professor for ten years (BSc and PhD), and worked as a prof for seven. For two of those years I’d held a term faculty position, which was like practice for being on the tenure track. I thought I knew what my future held: five years as an assistant professor, tenure and promotion to associate professor. At some point advancement to full professor.
My illness kiboshed everything. I got tenure and promoted to associate professor and then, instead of a path forward, there was a brick wall. I’d defined myself by my work for so long that, once I no longer did that work, I didn’t know who or what I was.
We are conditioned by society to define ourselves by what we do. At social functions, it’s the first thing people ask: “What do you do? Where do you work?” It’s a (not so) subtle way of assessing others’ status in the world, and often requires that we buy into the social hierarchy of occupations (lawyers, doctors, etc. being near the top, with car salesmen somewhere near the bottom, and writers and other creative people in an odd class of their own).
Last week I wrote about how I was as happy about a new freelance article as I would be “if I was still a scientist.” Several astute readers caught that phrase and asked why I don’t consider myself a scientist anymore.
I wrote about being a scientist for the Canadian Science Publishing blog a few years ago, and ultimately decided that being a scientist had to do with how you think. But I also wrote,

So the ultimate test of a scientist means being part of a scientific community.
Which is why I don’t feel like I’m a scientist anymore.
While scientific training affects us right down to how we make everyday decisions, because we’re trained to experiment, to test multiple hypotheses, and to pretty much question everything, we’re not scientists unless we’re *practising* that science.
So what am I if I’m no longer a scientist? Merely asking this question suggests that it’s still important for me to define myself by what I do. But instead of legitimizing me to others, I now see it more as helping me shape my days and contribute to society.
Three years ago I represented Canadian Science Publishing at the Geological Association of Canada (GSA) meeting in Vancouver. It was my first conference as a non-scientist, and I was still finding my way past that sudden shift in career path and through that brick wall. I was trying to figure out who I was and what I wanted to do, all within the confines of what I was able to do (also, huge thanks to Jenny Ryan, who was at CSP at the time and brought me on to write a few blog posts).
It was the first time I realized I was a science communicator, as I wrote:

“As neither a scientist nor a bona fide science journalist, I [work] from a middle ground focused on science culture, communication, and engagement.”

Two years later, the brick wall has largely dissolved, and the path(s) forward have become more clear.
Next time I go to a social function (a rare occurrence these days), my response to the question “What do you do? Where do you work?” won’t be, “I’m a scientist” but rather, “I’m a science communicator, championing Canadian science and scientists.”
More specifically, I’m a science writer, which I’ve been since I started my PhD back in 1999. I’m also a science editor, which I began training for during my PhD but only took up seriously about four years ago, and for which I find my scientific background is invaluable.
Say you’re an environmental science professor and/or a scientist, and some people will be impressed. Say you’re a writer and editor, and people make noises about how interesting that is.
But throw the word “disability” into the mix, and suddenly people aren’t sure how to respond.
The mental illness that made me leave academia five years ago pervades all aspects of my life. It is, indeed, wholly responsible for how I structure my days, and has a major effect on the work I’m able to do. I’ve only recently come to terms with the fact that I have a disability, and that it comes first, while everything else (including work) comes second.
Editors are all about language. As The Radical Copyeditor writes,

“Language is a tool. It can make our worlds bigger or make them smaller. It can be used to create connection or to cause harm. It can affirm or it can disparage.”

“Person-centred” language allows me to decide how I want to describe the role of my disability in my life. At this point, I’m not ready to identify myself as a disabled science communicator. I prefer to be a science communicator with a disability. But that may change, as the career paths before me shift and change.
What I do know is that, while I enjoy what I do, I no longer define myself by it. Even if I wanted to, my disability means I can’t.
As I wrote above, what I do gives some shape to my days and helps me feel like I’m contributing to society. So while I’m a science communicator, I’m also a woman, a cyclist, a kayaker, a hiker, a dog owner. A photographer, a knitter, a fiber artist. A writer, an editor, a friend, a daughter, a sister, an aunt, a wife, a person with a disability.
Winter is coming. Daylight saving time is just around the corner, and the bears are getting ready for bed (though they may not hibernate in areas where the weather is good and food is plentiful). We’ve spent the last week shutting down the garden for the year—blowing out the irrigation, harvesting beets and carrots, deadheading and weeding, mowing the lawns, filling the woodshed. In between I’ve been working on blog posts and pitch ideas, reading, and sleeping, cycling and hiking. I’m squeezing the last bit of goodness out of the season—all too soon the winter rains will return for good, and I’ll be more likely to ride the bike trainer indoors, to be knitting instead of gardening, to be hiking in a downpour. But I’m OK with where I’m at and with what I do.
Who knows what next fall will bring.

3 thoughts on “Your Job Isn't Who You Are”