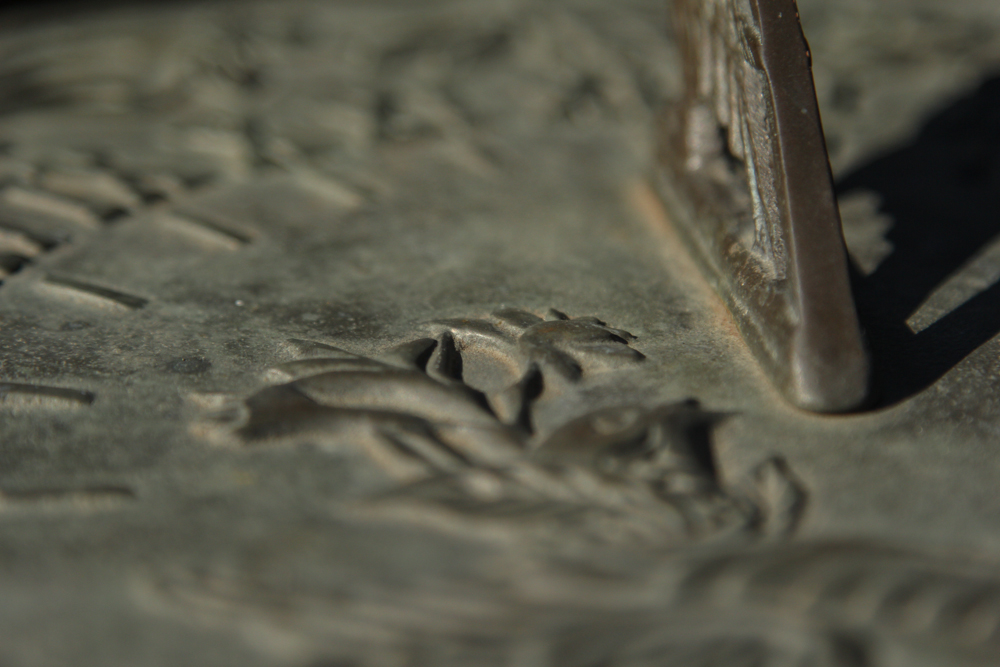 On the power of language, and the power men hold over women in academic science.
*edited 19 Oct to add stats on men being harassed/assaulted in academia.
Last night I couldn’t sleep.
I lay in bed and listened to the intermittent jingle of the chimes hanging by the front door, as gusts of wind marked the arrival of our first major fall storm. Eventually I fell asleep, to wake again only a few hours later because the electricity had come on after being out for a couple of hours, and my alarm clock was flashing 1:41.
I stayed awake because I was thinking about power.
About how we’ve been inundated lately with evidence of men using their power over women. Men like Harvey Weinstein, Roger Ailes, and Bill O’Reilly. And many more I haven’t mentioned here.
I was thinking about the #metoo hashtag. So many tweets and Facebook posts from women who have experienced sexual harassment and/or assault.
I wondered: why do women have to make themselves vulnerable by publicly admitting to being harassed, risking reliving one (or more) traumatic incidents? Why don’t men come up with a hashtag, something like #IKnew, to address their own culpability in this toxic culture?
As Vicky Smallman wrote (shared via Bernadette Wagner):

“I don’t feel a need to post the #metoo meme as I already know that every woman I know has experienced some form of sexual harassment or assault. We have had #yesallwomen and #beenrapedneverreported and yet apparently there is still a need for women to retraumatize ourselves by reflecting on the many times we have experienced male violence and entitlement.
Own your shit, men. How about you start a hashtag about all of the times you let harassment and abuse slide, interrupted a woman at a meeting or took credit for her ideas or dismissed her for being too “emotional” or “bitchy” or made a casually sexist comment or or or or
Edited to add: this is in no way a criticism of those women who are participating in the meme or disclosing in other ways. I see you. I believe you. I stand with you. And of course, I am you, too.”

I was thinking about the power of language, how the passive voice used to discuss sexual violence leaves men out of the picture and focuses largely on women. Because they always say it’s women who asked for it. Who dressed for it. Who put on makeup for it. Who brought it on themselves. 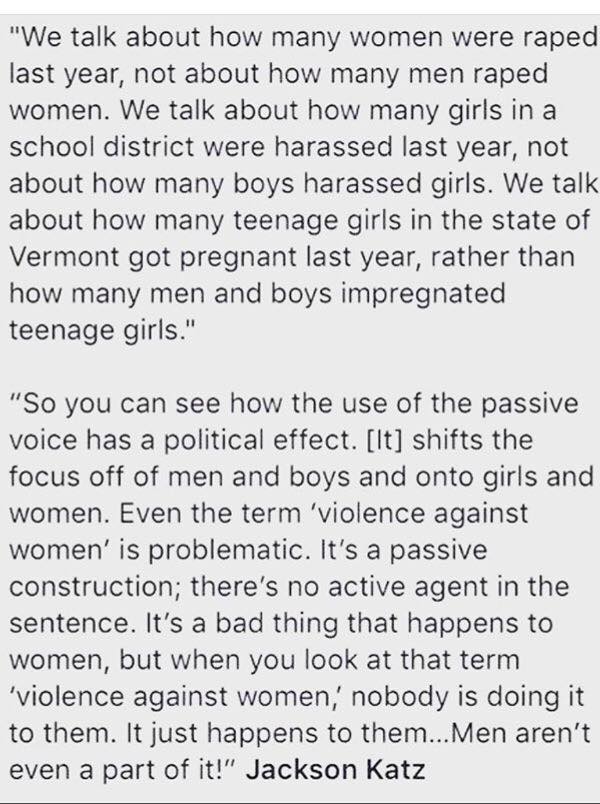 This power problem isn’t limited to media celebrities, however.
Consider the power imbalance in academic science, where men have more power than women, and professors have more power than their graduate and undergraduate students.
Just last week, a sexual harassment story came out about Antarctic geologist Dave Marchant, whose accuser waited until she had tenure to report him. Why did she wait so long? So that he could no longer have power over her career, which he had threatened to destroy.
Caltech astrophysics professor, Christian Ott, resigned in August after being found guilty of sexual harassment. UC Berkely astronomer, Geoff Marcy, resigned in 2015 for his treatment of female students. Jason Lieb, a microbiologist at the University of Chicago, resigned in 2016 after being found in violation of the university’s sexual misconduct policy.
These are just a few of the men who have been caught. Imagine how many are still out there.
In 2014, a group of researchers published a report on the safety of researchers in field-based research camps. The picture wasn’t good. 59% of over 650 respondents had experienced sexual harassment at field sites, and 19% had been sexually assaulted.
What’s worth noting is that it wasn’t only women being harassed and assaulted. 71% of women and 41% of men experienced harassment, while 26% of women and 6% of men experienced assault. While the numbers point overwhelmingly to the problematic treatment of women, we can’t forget that men are also subject to sexual violence.1


The researchers published a follow up report this week. This new work focuses on personal interviews with 26 of the original 666 respondents. The researchers found that field sites with PIs who set out clear rules governing appropriate conduct were less likely to have sexual harassment and assault issues than sites where rules of conduct were either not available or not enforced.
But it’s power trip stories like these that make me really sick:

“Some site directors limited team members’ access to food, water or the opportunity to empty their bladders.”

Given all of this, is it really a surprise that women leave STEM careers? There’s a lot of talk about the ‘leaky pipeline,’ or women leaving STEM to have families, or women not liking the competitive atmosphere, or whatever.
But what’s really making women leave science may be what Ryerson University’s Dean of Science, Dr. Imogen Coe, calls the ‘bro mentality.’ That mentality is evidenced by many of the examples I’ve outlined above (see the full report, which Coe spearheaded, here).
Need more evidence of this culture? Two female researchers in their 60s are taking the Salk Institute to court over:

“long-standing, systematic sexism by the…Institute. Salk’s administration…excluded them from funding, pressured them to downsize their labs, disparaged their work, and prevented them from being considered for lucrative grants.”

A third woman is also suing the Salk Institute for:

Consider this latest article from Nature News magazine. According to researchers, men share their research more with other men than with women. But it’s the researchers’ reasoning as to why the men do this that’s shocking. They invoke

“the male-warrior hypothesis, which states that men have evolved to form strong bonds with other males in their group because in the past this enabled them to defend territory from hostile attackers.”

Really? So does that make women the “hostile attackers?”
Academic science is not a welcoming culture for women and minorities. Equity, diversity, and inclusion (EDI) proponents like Coe are very clear that this culture has to change. For a start, we need to:

“Rethink and reconsider what is valued in STEM with respect to including Indigenous knowledge, feminist perspectives and critical race perspectives, etc.”

Coe hits the nail on the head when she says:

“We have to acknowledge that there are issues related to who has the power and who needs to share power, and potentially even give up power, in increasing diversity and inclusion.”

See. It’s all about power.
We have to level the power imbalance between women and men, and tread carefully around the power imbalance between students and professors (and assistant vs. tenured professors).
But who is going to do this work? Will it be women, again, sitting on committees and putting in valuable time to come up with policies to improve EDI? Similar to what Kelly J. Baker describes in her essay about sitting on a committee about precarious employment in academia?
As a complement to the #metoo hashtag, the #IWill hashtag has sprung up, where people provide concrete examples of what they’ll do to combat sexual harassment/assault. It would be nice if everyone—not just women—responded to this call.
As Rose Eveleth writes, men need to carefully consider their role:

“When you [men] tell me you’re shocked, what I hear is: “I have chosen to forget all the other stories I’ve heard about this from women.” Or, perhaps: “I have chosen not to actually listen to any of the women who have told me these stories.” Or, perhaps you’re the creep, and you’re simply shocked that one of your own got caught.”

Outside the wind chimes are jingling again. Our next big autumn storm is set to blow in overnight. Hopefully I can sleep tonight.
1A male colleague contacted me to say he had been assaulted. He was unhappy with the coverage of this issue, saying “It bothers me, the way this has been presented. Women encouraged to speak up, men encouraged to talk about what they will do to fix the toxic climate.” As noted in the Clancy et al. study, it’s not just women who are affected. So challenging power structures also involves examining situations that put men in an inferior—and therefore vulnerable—position.

2 thoughts on “On Power and "Bro Culture" in Academic Science”

When I get upset with people who scoff at Canada's climate policies or say that they amount to nothing, it's because they do not understand how @cathmckenna, @SPhillipsAB, and @RachelNotley (among others) literally put their lives at risk to deliver them.

#Water is a huge concern for BC residents, including quality and quantity. What ... are you doing about it @jjhorgan and crew? https://t.co/Vf0pbQPvvZ

We are looking for an editorial assistant at the University of Washington... Press (@UWAPress).

Our staff is unionized (@UWLibUnion, @SEIU925).