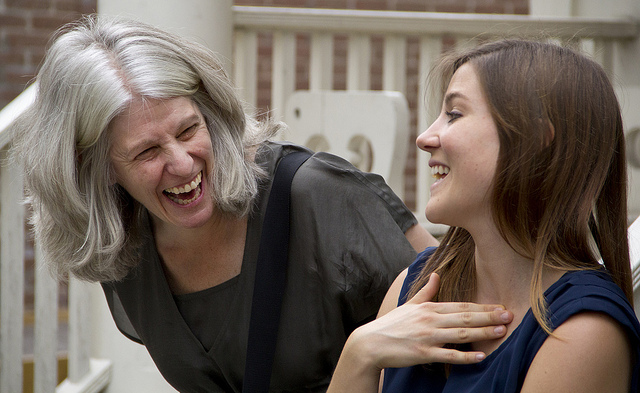 Last week I wrote about the phrase science literacy, and whether or not we should use it in science communication. Ultimately, I decided that it’s not as useful a tool as we think it is, particularly when you consider this this paper, which suggests that people who are more scientifically literate have “more polarized beliefs on controversial science topics.”
That post sparked a lot of interesting discussion online, and one of the topics that emerged was the idea of conversation as science communication. This makes a lot of sense.
For example, The Conversation (Canada—there’s also a UK and a US version), named themselves after exactly what they do: spark conversation around academic research topics by sharing them with a broad, public audience. Judging by their success, it’s a model that seems to be working.
—
Stepping back a bit, most people are aware of the deficit model of science communication, the idea that:

“public skepticism or hostility to science and technology is due to a lack of understanding, resulting from a lack of information…The model implies that communication should focus on improving the transfer of information from experts to non-experts.”

This is basically the classic lecture approach, where you bombard your audience with facts and hope they are convinced by your perspective. It sets up an us vs. them dynamic and, unfortunately, studies have shown that it doesn’t work.
An alternative to the deficit model is science storytelling, though many scientists are averse to the word “storytelling” in science. They perceive it as fiction, not realizing that what they do—using facts/data points to develop a narrative of what’s happening in a particular natural system or experiment—is in itself a form of storytelling. The key for science communicators, therefore, is to determine how best to tell a story while maintaining its scientific rigour.
A good example of science storytelling is The Story Collider, in which participants tell short stories about science, including lessons learned from their experience, in public. Story Collider even came to Toronto in September for Science Literacy Week (there’s that phrase again).
Another alternative to the deficit model involves connecting with people through their culture, values, and politics. Katherine Hayhoe, a Canadian climate scientist at Texas Tech University, has had incredible success in connecting with faith-based communities to communicate the science of climate change. This is because she meets people on their own ground, connecting to their personal values.
This is a key approach in science communication: figure out where your scientific topic intersects with your audience’s values, and use that angle to share scientific knowledge. For example, researchers have connected with hunters and anglers to address the impacts of climate change on their recreational activities, and those hunters and anglers have become heavily engaged in advocating for climate change solutions.
—-
Ultimately, as I noted at the beginning of this post, what we’re aiming for is a back-and-forth conversation with our audience, rather than the top down, elitist approach of the deficit model.
On Twitter, David Waltner-Toews (a Canadian veterinarian and writer) confirmed this approach when he said he sees science communication as a conversation rather than a lecture:

Relates to my understanding of science communication as a conversation, rather than a lecture.

Jay Ingram, who sparked the initial discussion about using the phrase “science literacy,” addressed a quote from the new Chief Science Advisor, Dr. Mona Nemer, who advocated for “a better conversation with the public.”

"A better conversation with the public"? I'd love to see the shape of that

I, too, would be interested in how we could initiate this.
The problem is that science is growing increasingly inaccessible, largely due to the gap in science language versus everyday, conversational language.
In a Nature article from 1992 (thanks Jay for sharing this), Donald Hayes lists the “lexical difficulty” of a range of conversations. At zero is a sample of 30 international English-language newspapers. An article in Nature, however, is at 55.5, while farm workers talking to dairy cows is at -59.1. So if you have the public reading newspapers at 0, but scientific papers are at 55.5, there’s a huge gap in conversational ability. 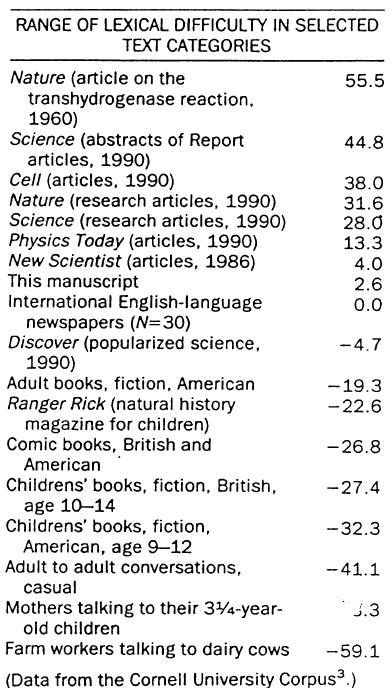 Not only that, but the lexical difficulty of scientific papers has increased over time—widening the gap between specialized science and everyday conversation. And given that this article was written 25 years ago, that gap has likely only increased. We somehow have to find a way to talk about science that shrinks this lexical gap and brings science language closer to the language used in newspapers. 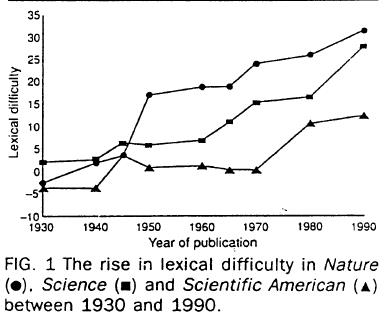 Another problem is that we often mistakenly view science as somehow outside of everyday conversation. We create specific spaces in which we can talk about science, rather than integrating these discussions into our everyday lives.
Caren Cooper, who was part of the online discussion about science literacy, said this “illustrates a problem of viewing science as separate from, and irrelevant to, daily life.”

those are common instruments, & I find it all illustrates a problem of viewing science as separate from, and irrelevant, to daily life

In a brief back-and-forth with Dawn Bazely, I came to the conclusion that it can actually be empowering to show how people use STEM skills in everyday life without even realizing it.

Yes, pointing out incidences where you're using STEM skills without even realizing it can be really helpful – and personally empowering.

Claire Eamer also had a good point, in that we target kids so much for science education, but what about adults? She’d like to see them as “unselfconsciously enthusiastic about science as most kids are.”

"Science literacy" sounds like a chore. I'd like to see adults as unselfconsciously enthusiastic about science as most kids are.

Conversation, then, is a key science communication tool because it allows you to connect with people through their culture, values, and politics, which takes away much of the ‘us vs. them’ mentality.
It also gives you the opportunity to talk about science anytime, anywhere.
Researchers who work in field settings note that they often get asked by passersby what they’re doing and why—a perfect opportunity for a conversation centred on science outreach.
Some people suggest talking about science with your friends and family on Facebook—it’s a non-threatening public forum that can generate great discussions. Particularly if you’re able to show how science pervades our everyday lives, that it isn’t some great mystery that you have to go to university to understand. It can also generate enthusiasm for science in adults—one of the key audiences we need to reach.
Conversations also allow people to see scientists as people rather than as a different species of human altogether. Plus, as the National Institute for General Medical Sciences (NIGMS) discussed in a June workshop (thanks Jenny Ryan for this article):

“conversations can go a long way in helping the public understand and appreciate the process of discovery.”

This is critical, because as I noted in last week’s post, scientists will benefit hugely if the public sees that:

“contrary to what they may think about individual geniuses and instant scientific breakthroughs, science is a long, iterative process, with many minds tackling similar problems.”

So next time you want to do some science communication, consider striking up a conversation. Figure out what the person you’re talking to values or is interested in. See if you can casually relate that to specific scientific projects, and/or to the science of everyday life. Make it a personal challenge to get them excited about science. It may be easier than you think.
Note: header image is “Conversation” by Didriks, CC-BY-2.0.

2 thoughts on “Conversation as science communication”