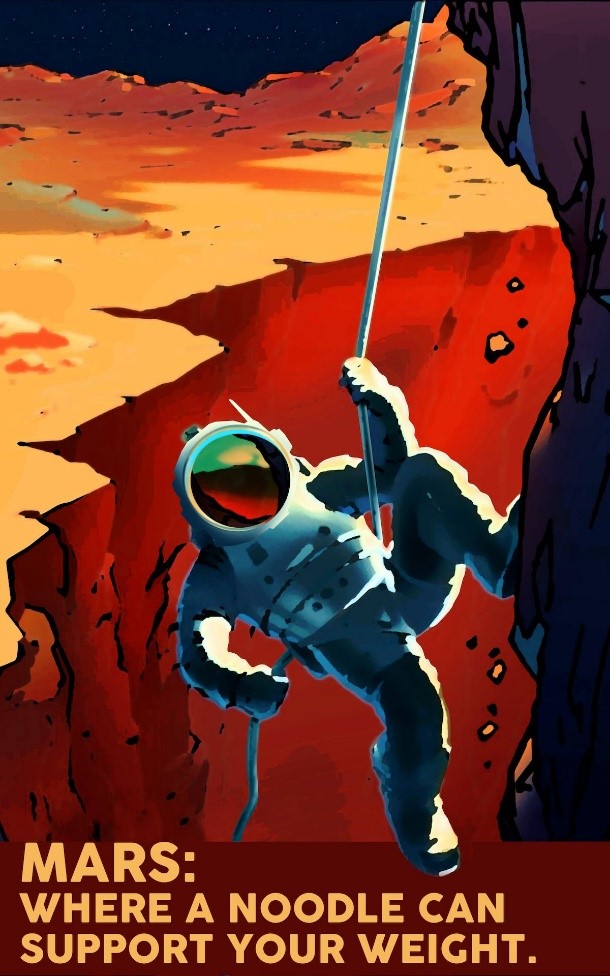 This week was fairly quiet on the BC wildfire front, with the exception of some really good news for evacuees. Residents of 100 Mile, 103 Mile, 105 Mile, 108 Mile, Lac La Hache were allowed to return home, and the Princeton fire was 100% contained, which meant those residents could also return home—and Highway 5A opened again on Monday. Residents of Williams Lake could also be returning home soon.
The weather forecast isn’t looking good for the fire hazard, however, with temperatures soaring to the mid-30s in the southern Interior and gusty winds as a low pressure system moves through the northern part of the province. According to our regional meteorologist, much of the Interior and southern part of the province (including Vancouver Island) has received only trace amounts of rainfall since June 20th, whereas the normal/average is approx. 30-40 mm.
I finally finished a book review that was due last Friday, so have spent more time offline doing some of my favourite things: gardening, cycling, and kayaking.
Drought in British Columbia
I’ve been watching the BC Drought Information Portal to get a sense of how drought is matching up with wildfire hazard. Surprisingly, we’re only at level 2 drought (Mill Bay, just down the road, has moved to Stage 2 water restrictions). Despite a few damp, cool days on the weekend, our fire danger remains extreme on the east coast of Vancouver Island. A lot of the BC Interior has dropped from extreme to high, which is good news for firefighters. 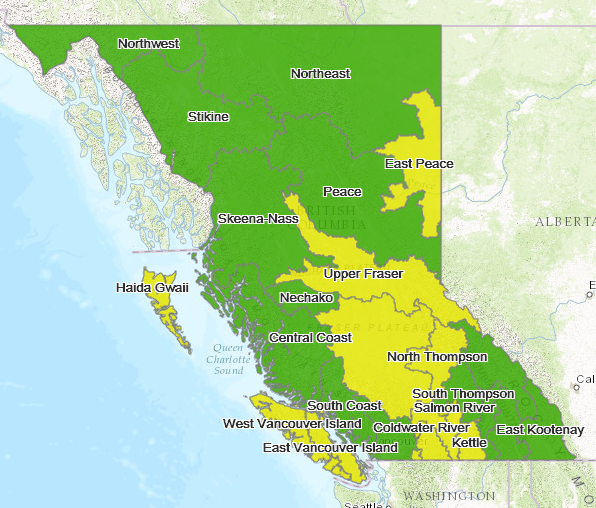 From BC Drought Information Portal. Green is level 1, yellow is level 2. 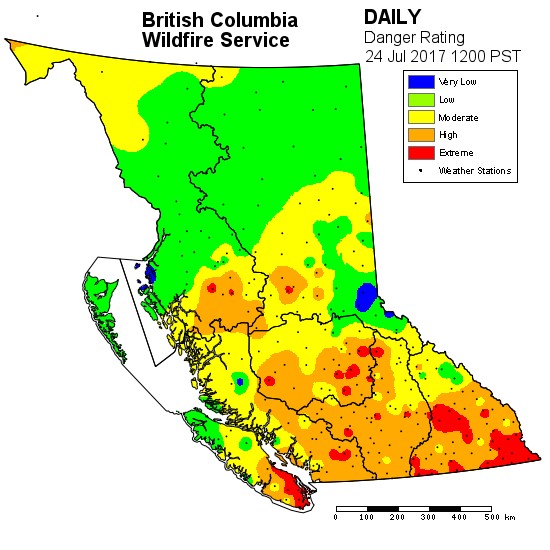 From the BC Wildfire Service.
Reduce your carbon footprint: only have one kid
A new study says what most people don’t want to hear: to have the biggest impact on reducing your carbon footprint, don’t have more than one kid. The remaining top three tips are more traditional: become vegetarian, stop travelling by plane, and get rid of your car. I’m definitely not doing my part, as I eat meat and have a car, though I rarely fly and don’t have kids.
I was surprised this article didn’t seem to get a lot of publicity, which could have been a result of the unpopularity of reducing the number of kids you have. Of course there are ways around that—one person mentioned that you could adopt.
The report notes that:

“neither the textbooks in Canadian schools nor government reports or websites in the European Union, the United States, Canada, or Australia highlight these choices, possibly because most of them require such extreme changes in lifestyle.”

It’s kind of like David Wallace-Wells’ climate change article that caused such a ruckus for spreading doom and gloom. We don’t want to hear bad news or be scared of potential climate outcomes, and we don’t want to make hard choices to adjust our lifestyle and avoid climate change.
So where does that leave us?
Science communication in 100 tweets
Science communicator Paige Jarreau posted a series of tweets on Sunday sharing science communication tips and resources. Start here to read your way through them. I was pleased to see she included my Canadian Science Publishing blog post on Science Blogging 101, as well as our FACETS paper on 16 tips for effective science communication.
Other resources of interest include a 2009 research paper by Matt Nisbet and Dietram A. Scheufele entitled What’s Next for Science Communication? Promising Directions and Lingering Distractions. And a reference to the ‘ABT Method’ (and, but, therefore) for science storytelling:


Other useful tips included taking time to learn about the history of science communication and how it evolved (the chapter by Carl Zimmer in Science Blogging: The Essential Guide, is a good resource here). Jarreau also recommends Matt Shipman’s Handbook for Science Public Information Officers. Be sure to read the whole thread for highlights I haven’t included here.
Science communication with Nancy Baron
The July issue of GWISLEAD (Graduate Women in Science Lead), a periodical profiling women leaders in science, features an interview with Nancy Baron. Baron is the Director of Science Outreach for COMPASS, a group that trains scientists in how to communicate with the public. Baron is also Canadian—she did her MSc at UBC and worked as a Director of Education in Vancouver.
These days she’s well known for her role at COMPASS, and for her ability to teach scientists how to communicate.
One part of her interview that really stood out was her conversation about men vs. women in science.

“Baron emphasized the importance of networks and collaboration. She asserted that we need others to provide motivation and that “finding a network of like-minded scientists provides both moral support and opportunities for brainstorming.”
She also noted that this may be particularly important among women in science. In her workshops, Baron finds that women are usually not the first to talk about themselves – rather the men are more likely to volunteer. She suggests that it is important to find your voice, encourage others to find their voices, and work at scicomm because, “good communicators are made, not born.””

West coast science communication volunteers needed!
The Science Writers and Communicators of Canada (SWCC; formerly Canadian Science Writers’ Association (CSWA)) is holding their 2018 conference in Vancouver in April. We’re looking for volunteers for all aspects of the conference, from programming to sponsorship to communication and registration. Send me an email (snowhydro1 [at] gmail [dot] com) if you’re interested in helping out!
And if you want to attend their conference this year, it’s being held in Ottawa on September 13-16.
Tourism on Mars
NASA created some classic style tourist posters for travel to Mars (which is hilarious after GOP Rep. Dana Rohrabacher asked a NASA panel about ancient civilizations on Mars). The Sarcastic Rover Twitter account made their own version of the poster, which makes me want to sign up to be on the next spaceship to Mars!

From @sarcasticrover
Making home by drinking tea
I’ve written a lot on my blog about what ‘home’ is and how we can create it in our own lives. This beautifully illustrated post by Candace Rose Rardon takes the reader on a worldwide tour, where each place Rardon lives is associated with a type of tea. In the end, Rardon defines home as follows:

“Home is the aggregate of our journeys, a collection of people and places, memories and experiences, each home building on the last.”

This is similar to the conclusion I reached in a 2015 blog post:

“… all the places you’ve lived imprint themselves on you, resulting in a mosaic of interior landscapes that speak to different parts of your soul and trigger different memories. Sometimes, you end up longing for an ideal home that doesn’t really exist. Someplace that has both the ocean and the mountains, the forest and the open fields, the continental and the temperate climate.”

What does home mean to you?

“Putting scientists in the precarious position of being told that they need to... go to industry to fund research means they are only asking the research questions that the industry agrees with,” Dr. Miller-Saunders said. https://t.co/fFTQYvi3I7

From Typewriters to Twitter: The @SWC_Can is celebrating its 🎉50th ... Anniversary🎉 TODAY!

We have a lot of amazing #SciComm events and projects planned for this special year. Here's a sneak peek of what the 50th Anniversary Committee has planned for #SWCC50. 👇