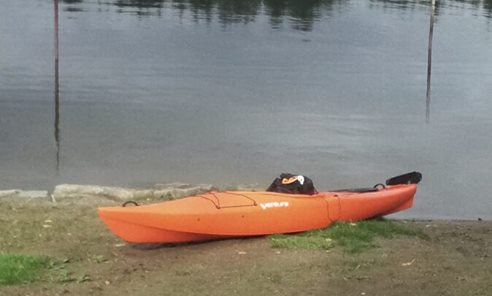 A klaxon sounds, six trumpet blasts echo from shore to shore. A moment of silence, and then a deep, thumping whoomph. I expect the shock wave will make the still water shiver like the surface of a giant timpani, but there is nothing. Only an untidy gaggle of Canada geese coming in for a water landing, the muscle memory of their regimented v-formation lost somewhere in the lazy days of summer. A hornet on its back buzzes, furious and trapped by the pull of water on its wings. Fish jump, presumably making short work of the hapless hornet. The construction site clatters into action again, another house going up on the waterfront.
This is my second voyage in my new kayak. As a hydrologist, it’s important not just to study water but to experience it, to view it from all angles. As a photographer, I’m looking for a new perspective on the natural subjects I like to capture. As a writer, I’m hoping time on the water will clear my mind of everything except the rhythmic cadence of the paddle, allowing words to drop into the now still well and ripple outwards into new thoughts and ideas.


Right now, though, I’m struggling. Every second stroke drips water from the paddle onto my head, and I’m constantly stomping on the rudder controls to avoid drifting off-course. I’m afraid of the deep darkness that glides under the bright orange hull of my small but stable craft. I’ve read somewhere that it’s similar to a fear of heights, which I easily admit to. I worry what will happen if I accidentally tip over: will I remember to pull my spray skirt free of the boat, or in the rush of water, darkness, and cold will I panic, and forget how carefully I positioned the release handle so accessibly in front of me? I’m an excellent swimmer, but earning your Bronze Medallion in a pool is a far different beast than doing the same in a lake. And front crawl can be difficult with a kayak hanging off your legs…
As my confidence increases, I hope to let these fears go. I focus on the rotation and pull of the paddle, and rock in the seat to find my centre of gravity. I remember to put the paddle down, every now and then, and just look. At the shreds of cloud rising from the slowly yellowing fall hills, the empty whiskey bottle growing algae on the lake bottom, and the woman on the dock – a stranger, waving, forging a connection over the unexpected swell of a passing motorboat.
One day I’ll bring my camera to capture the perfect reflection of a faded pink buoy in the glassy water, the upside down drift of a rare yellow leaf in the wake of my paddle. I’ll venture away from the shoreline and its clutter of docks and human activity, into wilder lakes with only marsh grasses and ducks for company. I’ll forget about the time, the distance, and the fatigue in my arms, focusing instead on the iron-tinged scent of fresh lake water and the marvelous perspective from my floating perch.
But for now I just get out on the water. Practice travelling in a somewhat straight line. And push my fears back one at a time.
———————
BTW for those looking for an update on the Cowichan River – water levels have increased a bit, but last week salmon were trucked upstream because they were having trouble navigating the river in low flow conditions. I haven’t checked the data recently, but we’ve had quite a bit of much-needed rain so things should be looking up!
Please follow and like us: