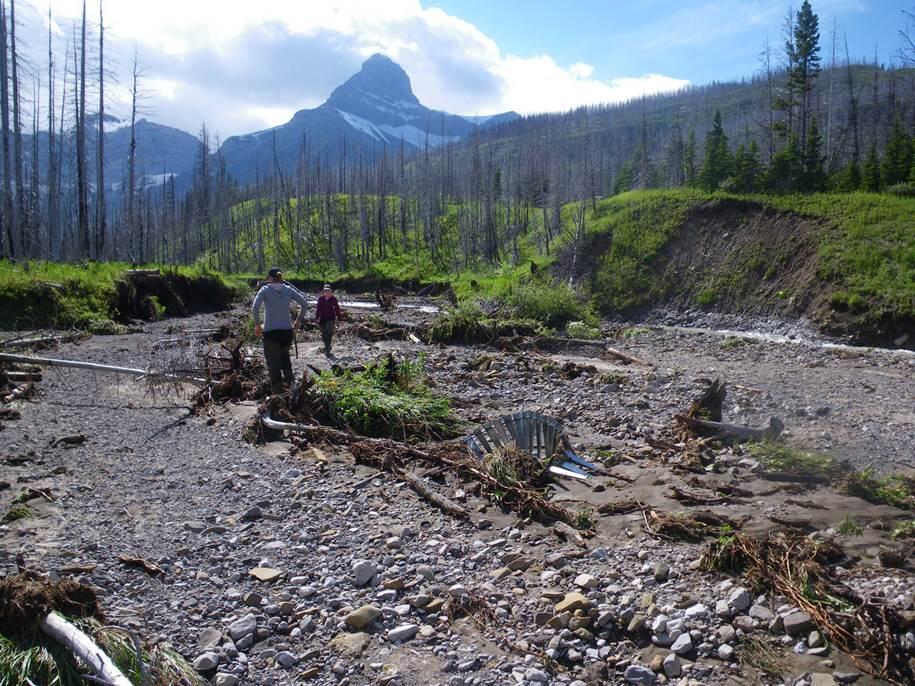 *Note: this post was subsequently picked up by rabble.ca, which “features some of the best new and emerging progressive voices in Canada”.
By now you’ve likely heard about the flooding in Alberta. While much of the media focus has been on Calgary, High River and Canmore, flooding has been significant across the province and into Saskatchewan and British Columbia.
To grab your attention right off the top, let’s start with some pics and videos that have been making the rounds on social media:


Most media coverage is missing a map showing all the major flooding locations. This is critical to understand not only how the weather affected flooding, but also how all the affected areas are geographically connected, and what the role of reservoirs and dams was in the flood progression.
Check this map of key flooding locations. If you see something important missing, let me know and I’ll add it in. See this Edmonton Journal article for a timeline of flooding events.
Weather Recap
CBC’s Clare Martin gives a great overview of the weather system that spawned all the mayhem, while Elise Stolte at the Edmonton Journal explains it in further detail. To make a long story short, the jet stream was stalled in a loop that parked a high pressure system over Alaska and the Yukon (which is why they had abnormally warm temperatures during the last week). When a low pressure system from the Pacific reached Alberta, that parked high pressure cell kept the low pressure backed up against the foothills, dropping rain across much of central and southern Alberta for much longer than expected. Many locations across southern Alberta received as much rain in 18 hours as they would normally receive in two months. Since some snow still remained in the mountains, there was also a rain-on-snow event that added even more water into the creeks and rivers.
Is this What the Future Looks Like?
Clare Martin’s comparison of the 2013 floods with those that occurred in 2005 is particularly interesting. Data released by the Government of Alberta indicate that this year’s floods far exceeded any flood on record in the province. At the beginning of the event, however, flood forecasters suspected conditions would be similar to 2005. As Clare notes, however, the 2005 flooding resulted from several rain events over a period of 7 days. In contrast, 2013 flooding resulted from 36 hours of constant heavy rain from a single event.
This type of storm may be the new normal. The hydrologic cycle is ‘speeding up’ with climate change, as there’s more moisture in a warmer atmosphere. This means we can expect high magnitude rainfall events more frequently. A recent study showed that what we now call the 100 year flood (or ‘design flood’ for engineering purposes) will occur more often – somewhere between every 10 to 50 years instead of every 100.
Floodplains + Development = Bad Combination

Floods are a testament to the power of water, a power that we tend to underestimate and assume we can control with infrastructure development and water flow management.
The 2013 flood situation was obviously exacerbated by the degree of floodplain development. I checked out the Alberta government’s Flood Hazard Map Application, to see what the flood risk assessment was for some of the communities that are now flooded.
The hazard map is somewhat hit and miss in predicting the extent of this year’s flooding. In Canmore, where million dollar houses have been built up to the edge of Cougar Creek, the map shows only a very small zone along the banks of the creek that is considered a floodway. In High River, which is now almost entirely under water, the map shows much of the town as being outside of the floodway, with only small parts in the flood fringe. However, the map does show that the multimillion dollar homes of Redwood Meadows (near Bragg Creek) were built directly in a floodway.
This suggests that the design flood used in the hazard assessment for these maps doesn’t apply to these types of weather events. And if we’re expecting to see more of these events, then it’s highly likely that areas that right now are marked as relatively low risk could be at much higher risk for flooding than we imagine. Time for some new hazard assessments!
Reservoirs: Flood Cause or Control?
Another aspect of this year’s flooding is the role of reservoirs in river systems, especially under flood conditions.
In southern Alberta, reservoirs are an integral part of the irrigation system. They store water during wet periods (spring snow melt, spring rains) for use during the dry growing season (July, August). They’re also considered excellent flood control devices for downstream communities.

The fast onset of the 2013 flood event, however, meant that dam managers weren’t able to empty reservoirs in preparation for high water inflows. The size of the event outstripped the storage capacity of most reservoirs, and meant that water was either flowing over the top of the dams, or that dams had to be opened to release water. In both cases, downstream flow was increased, more so when dams were opened. For example, when the Travers Reservoir on the Little Bow River was opened, residents in the area were warned that all downstream bridges would likely be washed out. When the Oldman Dam was opened, residents of Lethbridge were warned to expect a significant flood peak (luckily this didn’t happen – seems we had the easiest time of all the communities in the area).
With the projected change in precipitation events, reservoirs could be a liability rather than a benefit. While they can handle smaller events, and more predictable events that can be planned for in advance, the increase in precipitation event size and decrease in predictability makes it more likely that they’ll be overwhelmed.
What to Do?
Ironically enough, last month the Insurance Bureau of Canada released a report indicating that Alberta will be hardest hit financially by changing weather patterns. They specifically mentioned more intense rainstorms that could cause flash flooding. Sound familiar?
We should remember that the Canadian floods aren’t the only water disasters happening around the world. There has been massive, ongoing flooding across Europe, and India has also seen extensive flooding, with a death toll of 1000 far above the tally of 3 from the Alberta floods. The hydrologic cycle is global in scale, and changes in precipitation are occurring around the world.
Maybe this is the wakeup call that will get us seriously planning for a future where one in 100 year floods become one in 10-50 year floods, and areas that have never flooded before are inundated regularly.
If there’s one thing I take from all this: don’t assume your house wouldn’t have been built where it is if it wasn’t safe. Everyone wants to make a buck – builders, municipalities…assess the situation for yourself, and define your own willingness to risk it.
Please follow and like us: